Spinal muscular atrophy is one of the ongoing success stories in biotech. But that doesn’t mean the story’s over.

Cambridge, Mass.-based Biogen won a first-of-its-kind FDA approval a year ago with a new antisense oligonucleotide, licensed from Ionis Pharmaceuticals. The drug, nusinersen (Spinraza), allows kids with a crippling disease to produce greater amounts of the SMN protein they need to keep their motor neurons working. A pivotal study showed that 40% of patients treated with that drug achieved improvement in motor milestones. None of the control patients did that well.

Right behind, Chicago-based AveXis has reported exciting Phase I results with an AAV-viral vector gene therapy to deliver a functional copy of the human spinal motor neuron (SMN) gene into cells of patients with SMA Type 1, the most severe form. Market valuation for that development stage biotech company: $3.5 billion.

Yet as is often the case, success often begs new questions, and creates new opportunities. Cambridge, Mass.-based Scholar Rock has just pulled down a new $47 million Series C financing to see if it can take a different tack against SMA – with an antibody designed to prevent activation of myostatin. The idea attracted a new investor, Invus, to lead the Series C deal. New investor Redmile Group joined the syndicate, along with all of the existing investors. They are Polaris Partners, Timothy Springer, ARCH Venture Partners, EcoR1 Capital, The Kraft Group, Fidelity Management and Research Company, and Cormorant Asset Management. The company has now raised $109 million in total since getting started in 2013.

While the groundbreaking genetic therapies are focused on the motor neurons, that might not always be enough. Surrounding muscles may not have enough strength to act on the neural instructions, at least in a meaningful way.

Think of the basic muscle power needed to sit up in a chair, or roll out of bed. 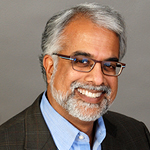 “You have to remember that myostatin is a molecule that drives breakdown of muscle,” says Nagesh Mahanthappa, CEO of Scholar Rock. “If you inhibit the molecule that breaks it down, that should allow muscle to build up. But the missing part is you have to have the capability to build muscle up in the first place.”

Myostatin has long tantalized, and eluded, drugmakers over the past 20 years looking at various muscle-wasting conditions. There’s also been plenty of hype about drugs making “mighty mice.” Novartis, Regeneron, and Atara Biotherapeutics all came up short in clinical trials with myostatin inhibitors in 2015. That “formed a dark cloud” over Scholar Rock’s lead drug candidate, as Mahanthappa described in an insightful guest post for Timmerman Report in July.

Rather than plunge ahead into the clinic, Scholar Rock stopped to re-assess what it thought it knew about the biology. This put the clinical development plan on pause for about a year. One observation: Trials often failed in older patients, who naturally have less capacity to build up muscle once it’s been lost (sorry, readers over 40).

What if you could make a myostatin-directed antibody for younger patients, who have more natural muscle-building capacity? Sounds good, but as a member of the TGF-beta superfamily, there are a number of quite similar structures important to growth that you definitely don’t want your drug to interfere with, including GDF-11 and activin, he said. “If you’re going to try to treat a young developing organism, you need a molecule to be incredibly safe,” Mahanthappa said.

SRK-015 seemed clear on this count, as it specifically binds with a precursor form of myostatin that hangs out primarily in the extracellular matrix of skeletal muscle cells, waiting to be activated when needed (like when you have a broken arm in a cast and need to rebuild muscle when it’s removed).

This form of myostatin is structurally distinct from antibodies made to bind with mature myostatin or the myostatin receptor.

Exploring this new potential indication for a myostatin inhibitor, Scholar Rock had talks with the Spinal Muscular Atrophy Foundation. Even after a couple big successes from Biogen and AveXis, patient advocates saw a need. The company was encouraged by the newfound clarification that comes when anyone blazes a new regulatory trail at the FDA.

But to be sure it was on good footing, it made sense to spend another year on preclinical work in non-human primates. Non-human primates tended to be a more predictive of clinical trials than other animal models. That meant it was time to swallow hard and invest serious time and money (one year and an undisclosed amount of money) on the non-human primate work. When the data came back, researchers were happy to see Scholar Rock’s drug appeared to have a bigger effect on “fast twitch” muscle fibers associated with strength and power than on “slow twitch” muscles associated with endurance activities. The “fast twitch” muscle fibers that are important to muscle strength are often greatly affected in patients with SMA.

After a year of sorting through data, crafting a new plan, and executing on it, the company closed its Series C financing. It is now in position to start its first clinical trial in the first half of 2018, Mahanthappa said. Other indications for its myostatin antibody are still very much alive, and the company has other programs in preclinical development for cancer, fibrosis, and iron-restricted anemias.

It’s a harrowing thing for any company to see a “dark cloud” hang over its field. It can be the end. But Scholar Rock’s repositioning – or pivoting, whatever you prefer to call it – is the sort of nimbleness and resilience that investors love to see.

Oleg Nodelman of EcoR1 capital said his firm re-upped because “the management team at Scholar Rock is awesome. The company has a deep scientific basis coming out of Tim Springer’s lab (who is a ninja in my opinion) and with the recent addition of David Hallal [former Alexion CEO] to the Board we have the makings of a super hero movie!”

More specifically, Nodelman said SRK-015 doesn’t look like it would be pigeonholed into a tiny subset of SMA patients. It could be given in combination with the Biogen or AveXis treatments because of the complementary mechanism, or could be given as monotherapy.

“015 certainly has monotherapy potential as well as potential in combination with Biogen and Avexis as it goes after muscle strength and functionality directly. We view the other players in the space more as collaborators than competition,” Nodelman wrote.

So You Think Your Drug Could Be Best-in-Class? What If the World Changes?