The alarm bells have been ringing for weeks. Stunningly, millions of people in the US weren’t listening, or didn’t want to listen.

We have wasted precious time in defending ourselves against the coronavirus pandemic. The horrible news from Italy is slowly starting to sink in for us in the US, and other parts of the world.

Sports cancellations, a prime-time Presidential address, a stock market crash, and celebrity diagnoses have all come together in the last few days to grab the country by the throat. This virus has the makings  of the worst pandemic our generation has seen.

What was written here two weeks ago bears repeating:

It’s all-hands-on-deck time. Collective problem-solving time. Not every man for himself time. Not finger-pointing / blame-shifting time. Not cynical attention-grabbing time. Not “I told you so” time.

Half-measures like the ones we’ve seen from federal and state officials aren’t going to cut it. Much more aggressive action needs to be taken on social distancing – perhaps a nationwide shutdown of schools, or nationwide shutdown of non-essential air travel. Drive-thru Covid-19 testing with protected healthcare workers, like in South Korea, needs to sprout up everywhere in the US next week. High school gyms around the country may need to be commandeered to become isolation units for the infected.

To do something this massive and painful and disruptive, we have to focus honestly on the task at hand. We’re talking about potentially saving hundreds of thousands of lives here in the US, and probably millions worldwide.

In moments of crisis like this, people find a way to reprioritize.

It can be done.

We have tremendous assets in the scientific enterprise. Research labs, for instance, can be temporarily transformed into Covid-19 medical testing facilities.

See this from the University of Washington: 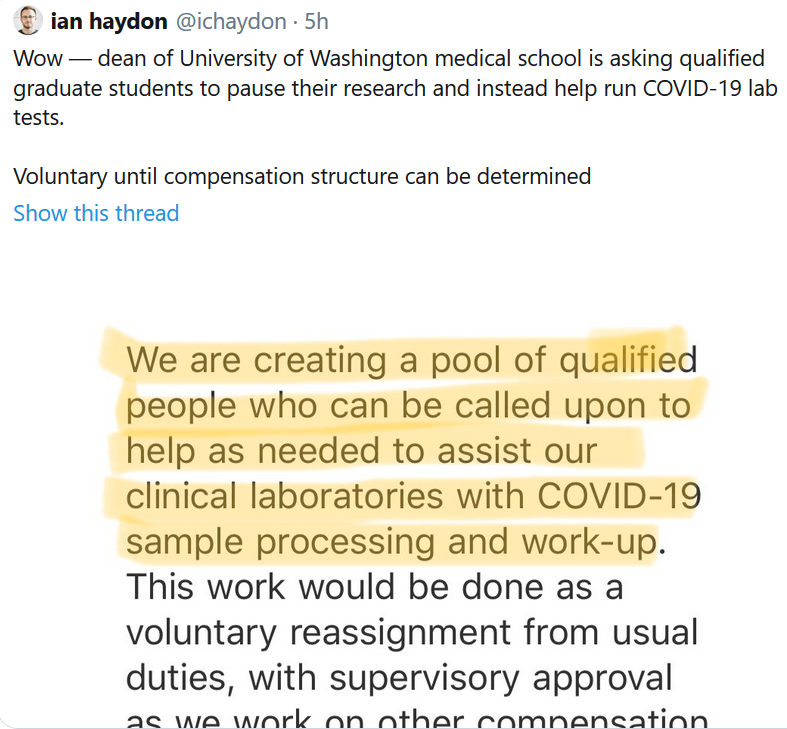 It’s amazing what can be accomplished with talented people, strong leadership, and a clear and urgent mission.

Leaders of all organizations – this is your cue to re-think who you are, what you do, and how you can help.

As you think about where you can have maximum impact, refer to this list of stories and resources below.

What We Can Do

Microsoft was quick to show leadership on the Covid-19 outbreak in its home state of Washington. In telling workers to stay home, it promptly did its part to #flattenthecurve. But it didn’t stop there. The company recognized the ripple effect that action would have on hourly wage earners who drive shuttles, staff company cafes etc – who would be losing their livelihood from the shutdown. Remember, capitalism has gotten itself into such a cold and cruel and dangerously individualistic place that we are having an election this year that in some ways amounts to almost a referendum on our economic system itself. Microsoft, recognizing a moral imperative to encourage sick workers to stay home, and to replace lost income for wage earners, was a couple steps ahead of political leaders who are re-assessing our tattered social safety net in this time of crisis. Companies would be wise to read Microsoft’s message.

If you hear someone say, “It’s Just the Flu” here’s a simple chart you can show. 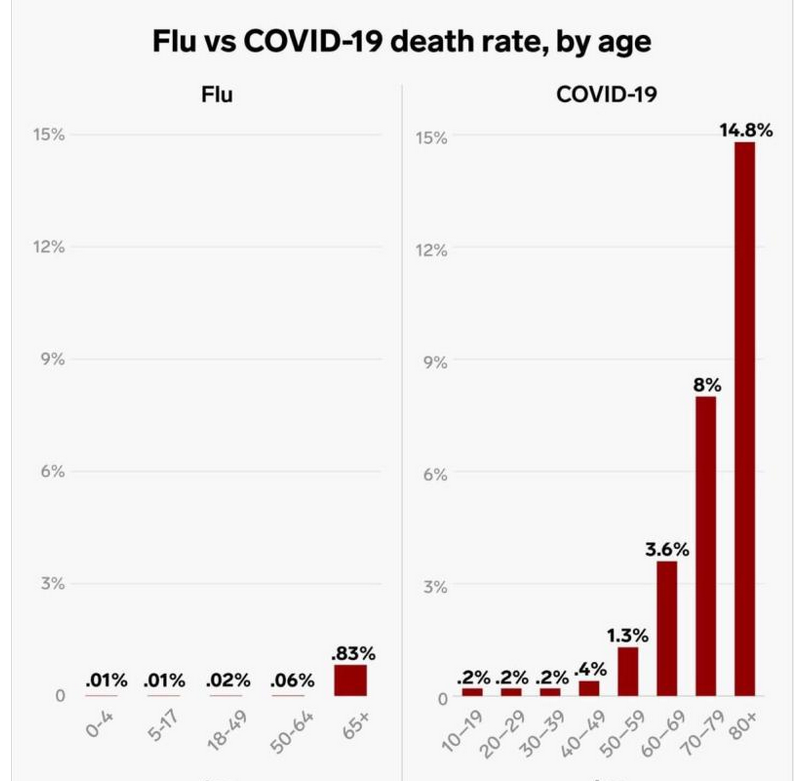 Once people are snapped out of denial and complacency, then you can begin to present how individual actions can add up to make a profound difference. See #flattenthecurve 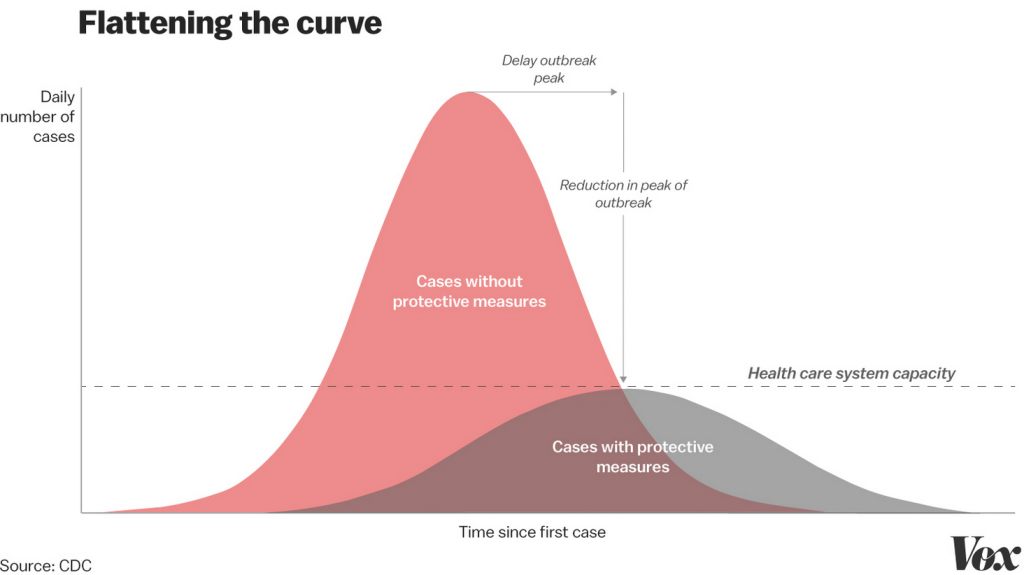 If people are still skeptical or unsure of the need for urgent action, then you can show what happens when a country doesn’t respond with speed and force. 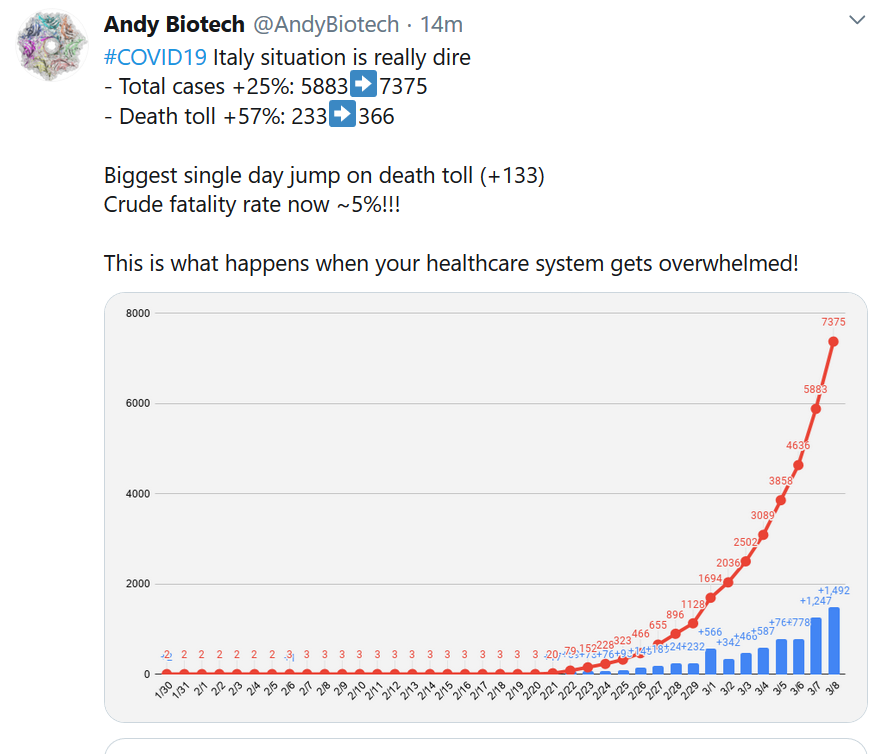 And in other biotech news this week…

BMS said it failed in a Phase III clinical trial of elotuzumab in combo with Revlimid/dexamethasone (Rev/dex) for newly diagnosed multiple myeloma patients.

Acceleron Pharma said it failed in a Phase II clinical trial with a drug candidate for Charcot-Marie-Tooth disease.

Corcept Pharmaceuticals named Gregg Alton, the longtime former Gilead executive, to its board of directors.

TScan Therapeutics added Doug Fambrough to its board of directors. He’s the CEO of Dicerna Pharmaceuticals.

Cambridge, Mass. and Netherlands-based Harbour Biomed raised $75 million in a Series B deal. It’s working on cancer and immune disorders.

GenFleet Therapeutics raised $80 million in a Series B financing. The China-based company is working on treatments for cancer and autoimmune diseases.

Seattle-based Silverback Therapeutics raised $78.5 million in a Series B financing to advance antibody-conjugate work against cancer. US Venture Partners led.

Flagship Pioneering announced it has merged a couple of its companies into Repertoire Immune Medicines, a company working on cancer, autoimmune disease and infectious disease. It has raised $220 million combined. Former Bioverativ exec John Cox was hired as CEO.

Boston-based Imara, a developer of sickle-cell disease therapies, raised $75 million in an IPO at $16 a share.

San Francisco-based Invitae agreed to acquire YouScript and Genelex and Diploid. YouScript helps clinicians decide what to do with genetic information. That deal was worth $79.3 million. Genelex offers pharmacogenetic testing. Deal value: $20.7 million. Diploid uses AI to assist with genetic diagnoses. That one was worth $95 million.

Bridge Biotherapeutics struck an AI drug discovery partnership to work on as many as 13 small molecule programs with Atomwise.

Boston-based Intarcia Therapeutics, for the second time, was unable to secure FDA clearance to start selling its drug-device combo treatment for diabetes.

The FDA announced that two people have died, and four more are hospitalized, after getting stool transplants from OpenBiome

Personal Note: I’m working from home in Seattle — the heart of America’s uncontained Covid-19 outbreak. I’ve been social distancing since Feb. 29. Have spent a fair bit of time on the phone with family members in the Midwest, urging them to be cautious ahead of what’s to come.

Many of you – members of the biotech / biopharma community — are doing similar things for your families. If you have good ideas on things this we can do, let me know. luke@timmermanreport.com.