As background: I am Italian-born, and was raised in Italy. My entire family works and lives there, mostly in Milan or nearby areas. I have been communicating with family members about the noval coronavirus for the last month.

I have a PhD in Molecular Biology from Geneva, Switzerland, and I have been in biotechnology venture capital since the early 2000s. I live in Boston now.

The following is a personal account of what I think the lessons should be from the Italian situation, and their response, as well as what I think should be the immediate US response.

First, some facts (see graph below): 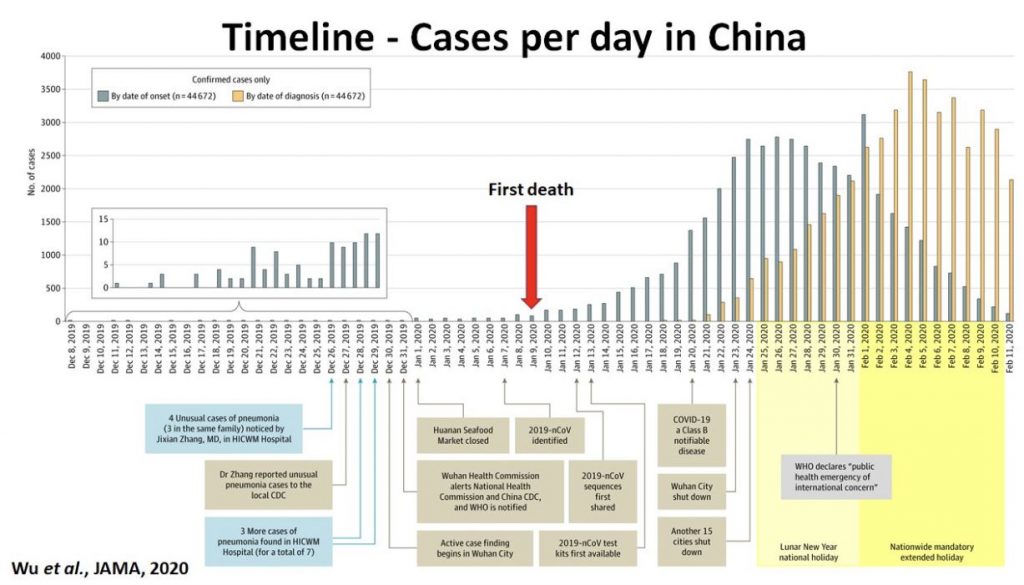 Reporting to the World Health Organization of cases of pneumonia, of unknown etiology, started on Dec. 31, 2019.

First sequence of the 2019-nCOV virus was shared with the scientific community on Jan 12. The number of daily confirmed cases passed ~500 on Jan 16.

Wuhan City was shut down on Jan 23. Another 15 cities were shut down in China on Jan 24. WHO declared “a public health emergency of international concern” on Jan 30.

The first virus infection cases in Italy were confirmed on Jan 31, with two Chinese tourists (in Rome) positive for the virus.

It is unclear if the current outbreak in Italy derived from lack of containment of potential virus spread from those cases: on Feb 7, an Italian man repatriated back to Italy from Wuhan, China, was hospitalized and confirmed to be the third case in Italy.

As you all should know by now, the virus has an incubation time of roughly two weeks (with significant variability between individuals likely). The incubation time is defined as the time it takes between the day a person is infected, and the day that the person starts having symptoms of the disease. When people are suspected of having been in contact with the virus, it is highly recommended that they undergo quarantine for that two-week period, to limit infection spreading.

By the beginning of March, 11 cities in northern Italy (all close to Lombardy) were placed under quarantine. By March 8, Italy had performed ~50,000 tests for the virus. Also on March 8, Italian Prime Minister Giuseppe Conte extended the quarantine to all of Lombardy and 14 other northern provinces; this was extended to all of Italy just one day later — on March 9.

Some background on Italy and in particular Lombardy: this is the richest region in the country, with excellent healthcare infrastructure. Italy has ~3.2 hospital beds / 1,000 inhabitants (a higher proportion than the US). Doctors and healthcare professionals in general are well-trained and dedicated. There are no negative incentives to getting tested (and skipping work) early in the disease progression phases, like there are in the US. Italy has universal healthcare insurance and coronavirus tests were made widely available very early on.

The case fatality rate in Italy has also been extremely high: close to the Chinese numbers, of roughly 3-3.5% CFR rate. Much higher than Korea, which has implemented massive scale testing and extensive contact tracing and quarantine since very early on. Some of this high number in Italy might be an artifact of the relative lack of testing of asymptomatic carriers, some might be due to an aging population (Italy skews very old in its demographics, and the elderly are particularly susceptible to high level of morbidities and fatality with this virus). Some more might be related to social customs (Italians are an extremely social culture and congregate regularly in large groups with extensive physical contact: greetings are two kisses on the cheeks even with relative strangers).

What does “quarantine” mean? It means everybody is stuck at home. People who can, are working from home. Shopping is done online preferably: alternatively, one household member only at a time can go to shops. Shops are closed on weekends. No schools, no gyms, no cinemas, no restaurants unless they can guarantee a minimum distance of ~3 feet (damn Imperial measurement system) between customers. No concerts, no conferences, nothing. If you are leaving / driving somewhere, the police will stop you, and will ask for the reasons for your travel. If it is not justified (medical reasons, urgent work reasons), you will be indicted for violating the quarantine and reported to the courts. And these measures are being enforced (startlingly enough).

I have family members who have been stuck at home for days now and are literally going nuts. And they have a way to go (weeks, if not months).

Early on, I had the hardest time making my family understand how serious this was (I started pestering them more than four weeks ago to prepare). This is called “Social Distancing.” It feels undemocratic, excessive. We are not China! We are a vibrant democracy of individualists who like to go out every night!

Why is Italy now shutting down its entire country? With incalculable economic consequences (in a country already pretty much in recession)? For a virus with a likely case fatality rate of close to ~1% maybe? Are we insane?

The country is, arguably belatedly, making a dry, cold calculation. The choice is the following: shutting down the country and preventing as much as possible fast spreading of the virus (“flatten the curve”) and in so doing limit its current, catastrophic impact on hospitals and caregivers; OR: continue life as usual and basically overwhelm the healthcare system.

What is happening to hospitals around Milan now (and it has been happening for days): ALL routine treatments / diagnostics, operating room procedures, even emergency procedures like trauma and strokes are being delayed / diverted to other centers to preserve what little capacity they have to treat virus patients. Virus patients with severe co-morbidities and/or over 65 years old are not being provided with ventilators: caregivers are triaging, like in a war zone, for people that have a possibility to recover and that they can save. ICU bed capacity has been nil for days.

Think of the implications. Caregivers are physically and emotionally exhausted. They were / are not being provided with protective gear: they are making mistakes. They are falling ill themselves. All doctors / nurses, of any specialties, are only caring for virus patients. More and more people will suffer fatal consequences of this. Not stopping as much as possible the spread of the virus is not an option. China and Korea did it. At great economic cost, for sure, but in so doing saved immeasurable number of lives.

I know what some (maybe most of you are thinking): Why should I change my way of life? This is overblown. It is like the flu. I am not in at-risk demographic.

It is not like the flu. There is no vaccine or natural immunity. The severity and fatality rate of the disease on the elderly and patients with co-morbidities is horrific (up to 18% of people over 70 years old seem to be fatally affected). Hospitals cannot possibly cope with hundreds of patients in intensive care, all at the same time. There are not enough beds, equipment, protective gear. By not contributing to reducing the spread / flattening the curve, even if you are not in an at-risk demographic, you are still contributing to spreading the virus.

So, what could / should the US do?

I personally think time for containment is over. A few hours ago, New Rochelle, New York was cordoned within a 1-mile radius by the National Guard. There were a few cases detected there days ago. Those people were infected ~2 weeks before that. There has been no extensive testing performed in the US at all for the last few weeks. Testing capacity is only coming up online now.

Here are my suggestions:

This needs to happen now. Looking at infection curves, the US is now where Italy was 11 days or so ago.

We have no time to lose. And may the fates look upon us with mercy.

The Long War
Omicron Variant: the Latest Twist in the Pandemic
From Delta…to Omega?
2021: The Rise of the Variants