This column will have a “glass half full / glass half empty” feeling for many readers, I fear.

Before diving deep into the troubling emergence of highly transmissible and virulent SARS-CoV-2 variants, a couple of brief reminders:

Science is moving very fast indeed, and it must continue at this relentless pace because we still have much to learn.

To drive this point home, allow me to relay a personal anecdote. I was asked to opine if it was safe for a pregnant woman (friend of a friend) to receive one of the mRNA vaccines currently being distributed in the US (she is in her third trimester). After many obvious and obligatory caveats (I am not an MD, and *definitely* not an ob/gyn, nobody should listen to me for medical prescriptions, etc etc), I mentioned that, yes, mRNA vaccines do elicit a strong immune response (the main goal with any vaccine), but that I suspect the potential risk of harm to the fetus was indeed very low (though not zero).

Two days later, WHO issued guidance “recommending generally against the use of the vaccine during pregnancy except for those at high risk of exposure or having a severe case”… Indeed, neither the ModeRNA nor the Pfizer/BioNTech mRNA vaccines have been tested so far in this population (there are plans to do so shortly). If I could print here the faceplant emoji, I would.

The WHO guidance isn’t based on any data from vaccine trials, as far as I can tell, but more out of an abundance of caution. That said, this is not straightforward, since pregnant women appear to be at higher risk of contracting severe cases of COVID-19 as well as (possibly) having a higher risk of preterm delivery (incidentally, the CDC has maintained that pregnant women should get vaccinated).

So, we still have a lot to learn. And we need to remain humble about how much we still do not (yet) know.

In the US, after the rise in cases and fatalities derived from Thanksgiving and Christmas mingling, we seem to be turning the corner (all the graphs below from @COVID19Tracking). It’s yet another reminder that strict Non-Pharmaceutical Interventions (NPIs) — that we knew worked 100 years ago — are still effective in preventing viral spreading via the respiratory route (see, for example, how flu transmission has basically been wiped out this season). 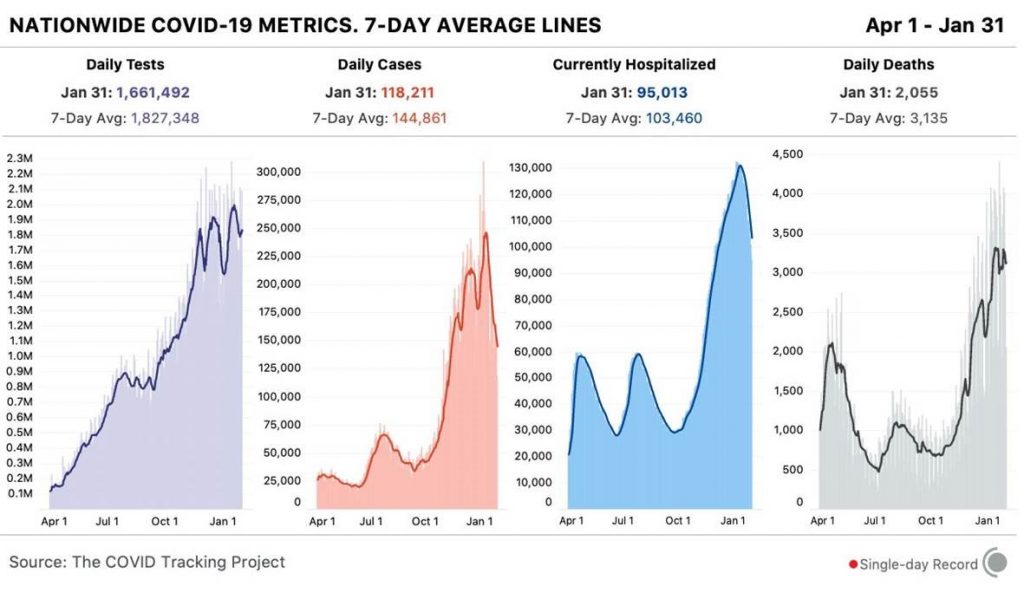 As you can see, cases / hospitalizations are coming down (though from what is an exceedingly high level): cases are definitely trending down and are ~40% below the recent peak in early-to-mid January; hospitalizations are also ~30% down from peak. Tragically, deaths remain extremely elevated at >3,000/day, and will continue to be for several (2-3) more weeks: yet another reminder that deaths are a lagging indicator resulting from infections that occurred ~4-6 weeks prior. The country will soon surpass the sober milestone of >500,000 overall fatalities.

That said, we should expect COVID-19 deaths to begin trending down soon-ish (never soon enough), assuming we continue to behave responsibly (more on this later). Encouragingly, the US administration communication policy has taken a U-turn versus the previous one (even the CDC, under new leadership, has *finally* issued a mask mandate for people using planes, trains and other public transportation).

Another, unabashedly positive piece of news: we now have positive results from two more vaccines, J&J’s and Novavax’s. This is in addition to a slew of data showing several antibodies (from Lilly and Regeneron: alone and in combination) are also extremely effective at preventing deaths and reducing hospitalizations, or in reducing overall infections within the first week, with 100% prevention of symptomatic infections.

At least one study (Regeneron’s) shows markedly decreased levels / duration of viral shedding in the asymptomatic infections that occurred in the treatment group. Of course, these antibodies need to be given at the right time, prior to hospitalization, and that’s a tricky thing for an intravenous medication (though subcutaneous formulations are in the works). But still, these are important medicines.

In case it needed to be said (again), the biotech / pharma industry is rallying at unprecedented scale and speed to provide a solution to this pandemic. What are GameStop or AMC doing in comparison??

For how I see future treatment regimens (vaccines vs antibodies vs antivirals etc), I will direct you to the “Forecasts” section of this column (at the end).

Back to the (new) vaccine data: I would like to make several (non-mutually exclusive) observations (starting with the inevitable request to compare the different vaccine results):

The table below (source: https://cov-lineages.org/global_report.html) shows some information about the currently-known viral variants that are spreading in different geographies: for the non-geeks/amateur virologists amongst you, B.1.1.7 is the “UK variant”, B.1.351 is the “South African variant”, and P.1 is the “Brazilian variant”. 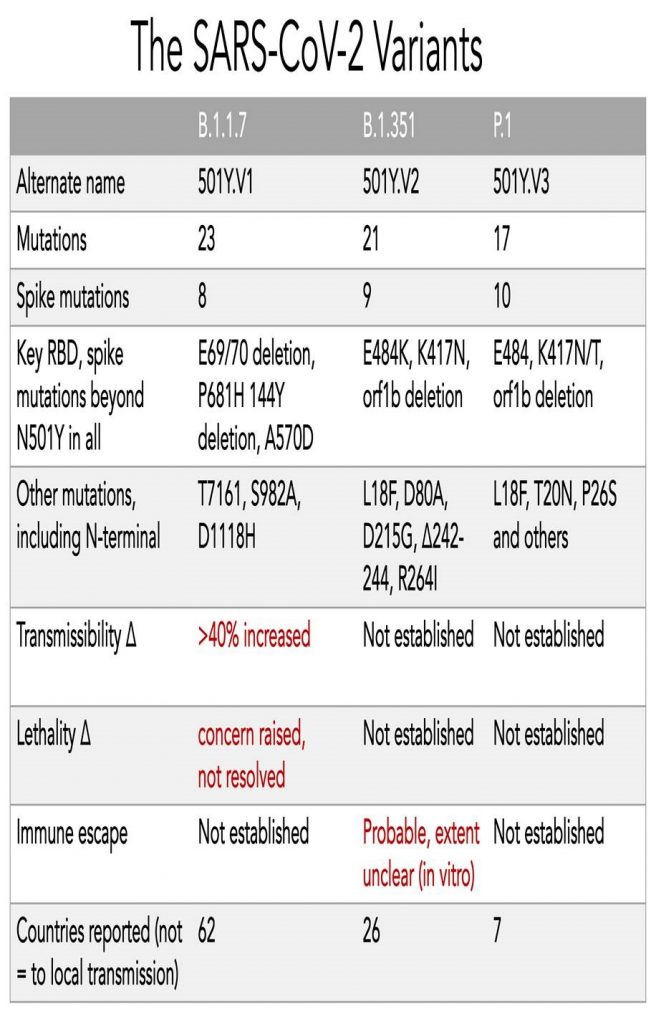 You have likely been hearing about those variants quite a bit, so will spare you a lengthy and geeky discussion. If you really want to go deep into the rabbit hole, this thread from eminent virologist Florian Krammer (@florian_krammer) does a pretty amazing job.

Here are some broader thoughts that should worry you, hopefully arranged in some sort of logical order:

I leave you with a mixed message: it is stunning what human ingenuity has achieved in such a short period against this pandemic. Vaccines (and other pharmaceutical interventions) are a necessary, but not sufficient component of the effort to overcome it. Public health measures, improvements in logistics / vaccine distribution, broad / fast genome surveillance, and many other measures are also necessary.

That’s because — and it pains me to say this — this pandemic really is but a dress rehearsal. Viruses and other infectious diseases are humanity’s oldest and strongest enemy.

We need to win this battle and prepare for the inevitable, bloodier wars that are surely coming.

[Added: 9 am ET Feb. 2] Within hours after this column went to “print,” there is now evidence that the UK variant B.1.1.7 has picked up the E484K mutation (linked to some degree of ability to evade the immune system in the South African and Brazilian variants):  and for a more thoughtful / full thread, please check out this from @kakape. This is pure speculation at this stage, but it feels sensible to infer that this viral mutation confers an evolutionary advantage in populations with some degree of existing immunity (UK, South Africa and Brazil were hit extremely hard in the first wave of infections in the Spring of 2020).

I will leave you (again) with this quote from Kai Kupferschmidt: “this virus is telling us again and again, that it will gladly take any opportunity we allow it of spreading and replicating to evolve and make our lives even harder.”

In retrospect, I now wish that the entire planet would have gotten into a synchronized and strictly enforced lockdown for 3 weeks or so in early March…