Let’s Take Cancer Research All the Way to the Top

I’ve been writing about advances in cancer research for about 15 years, and I have been climbing mountains almost that long. The science is at a moment of tremendous possibility. We can’t go halfway now. By combining two of my passions, I hope to raise significant money and awareness for a world-class institution — the Fred Hutchinson Cancer Research Center, in my hometown of Seattle — and to support science itself.

Join me on this quest to the summit of Mt. Everest, the highest mountain in the world. Donate today to support the Climb to Fight Cancer at Fred Hutch!

END_OF_DOCUMENT_TOKEN_TO_BE_REPLACED 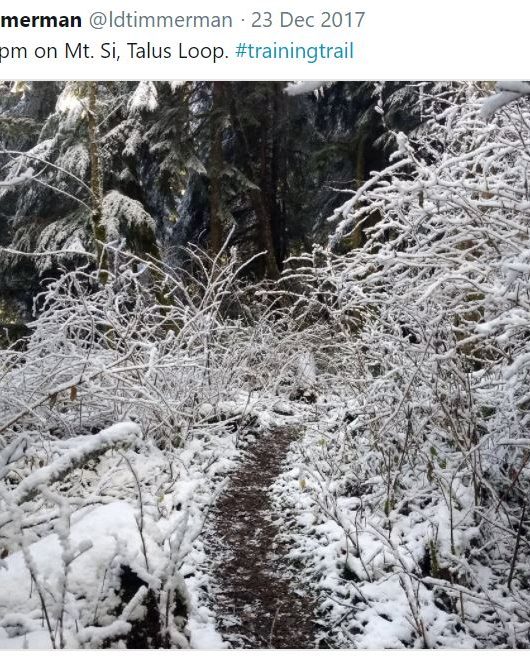 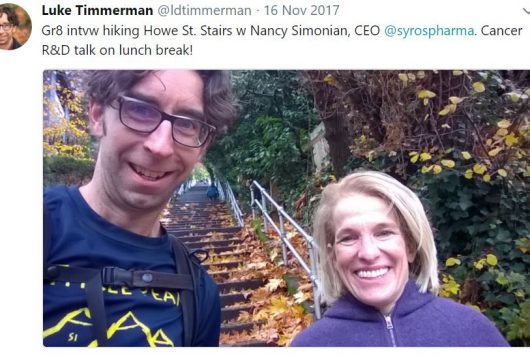 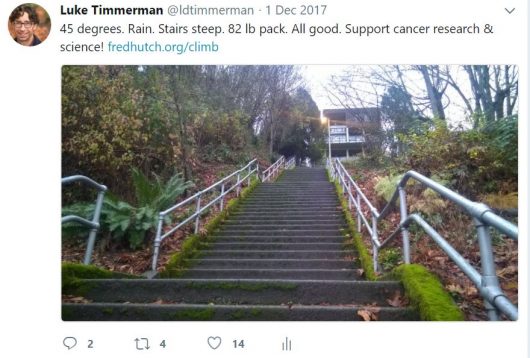 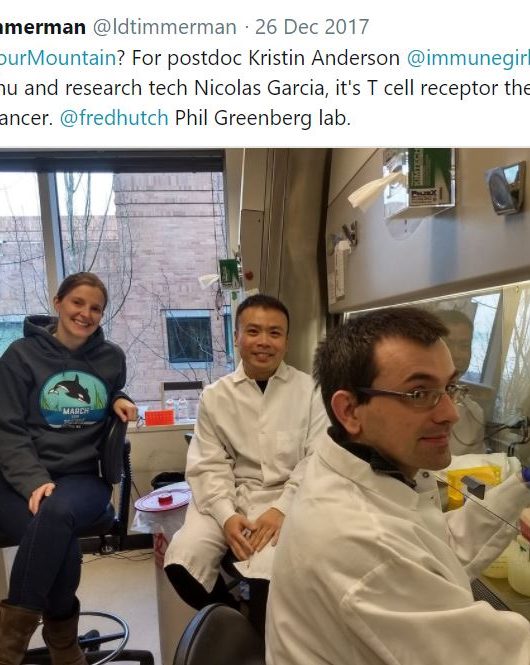 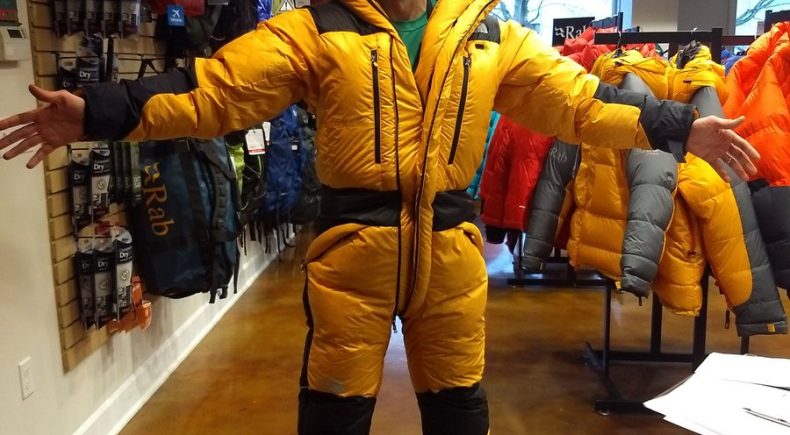 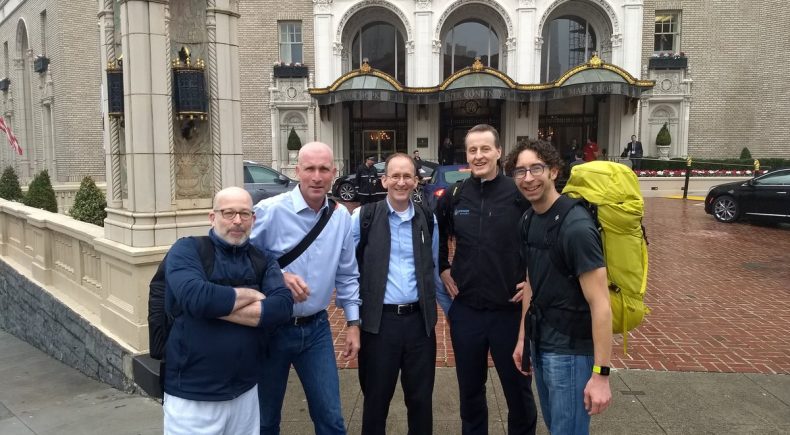 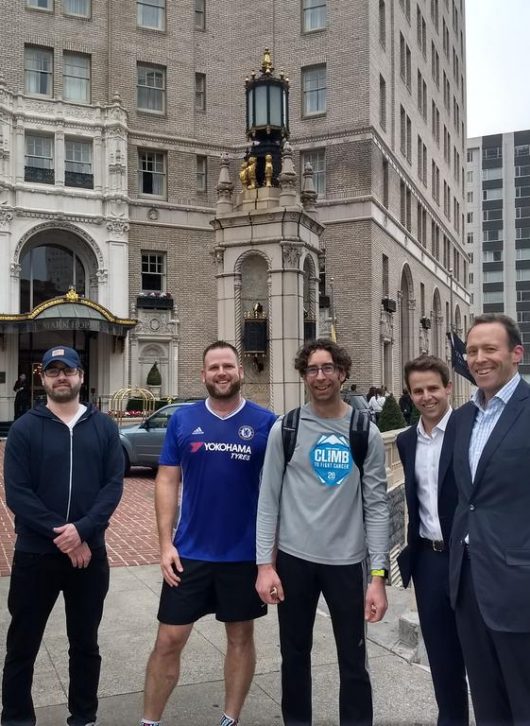 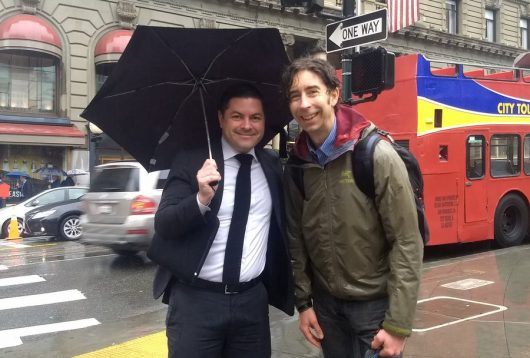 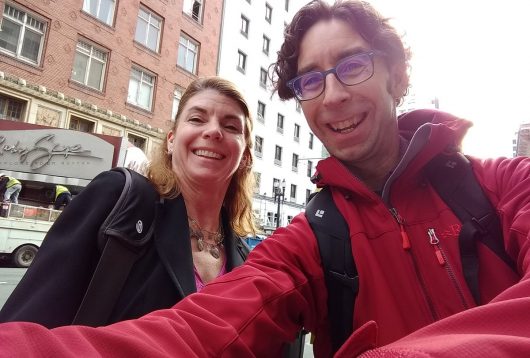 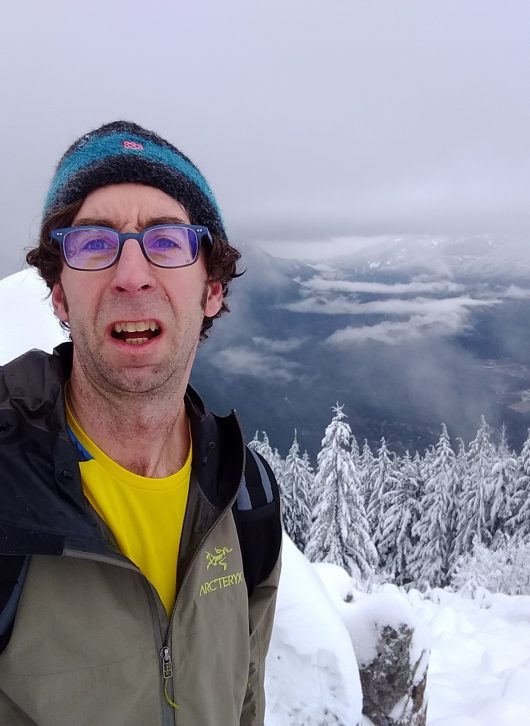 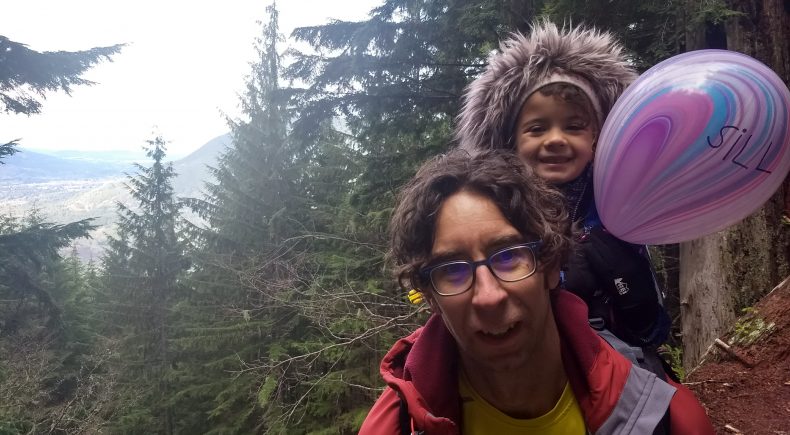 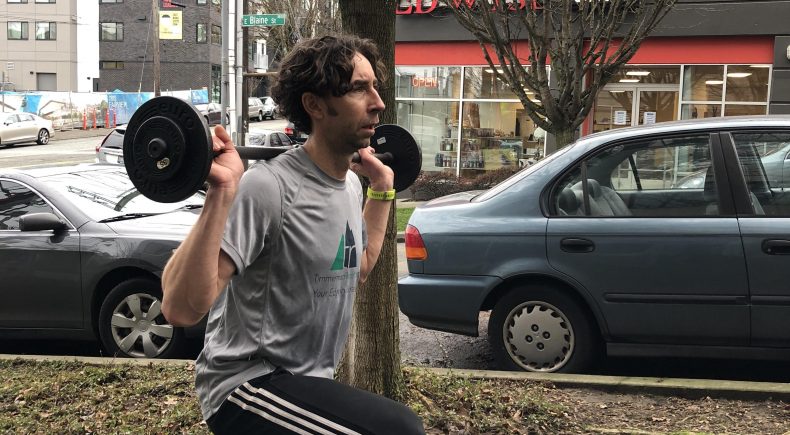 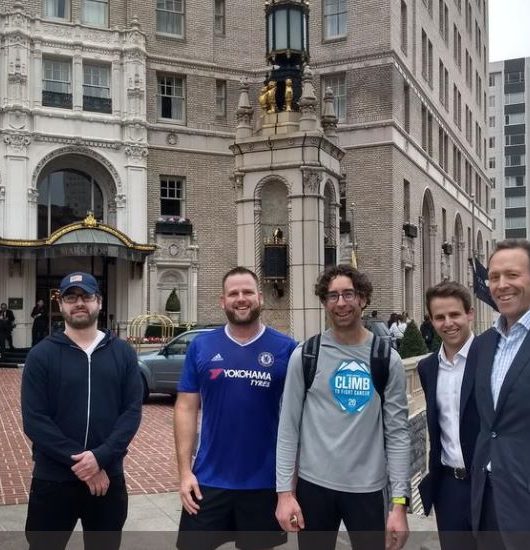 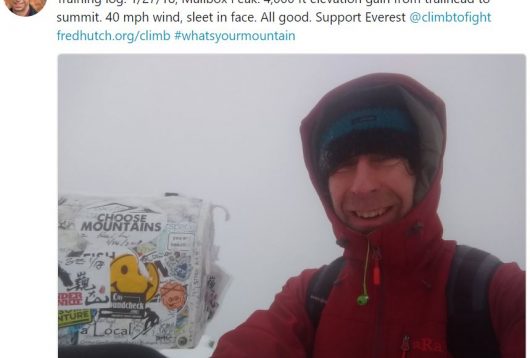 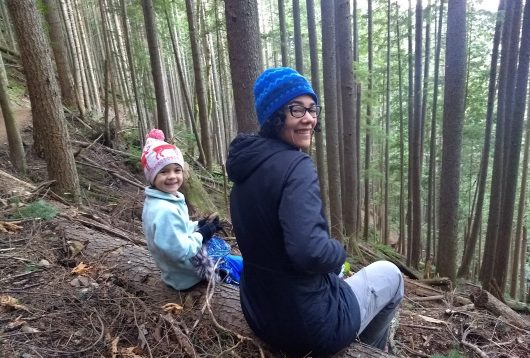 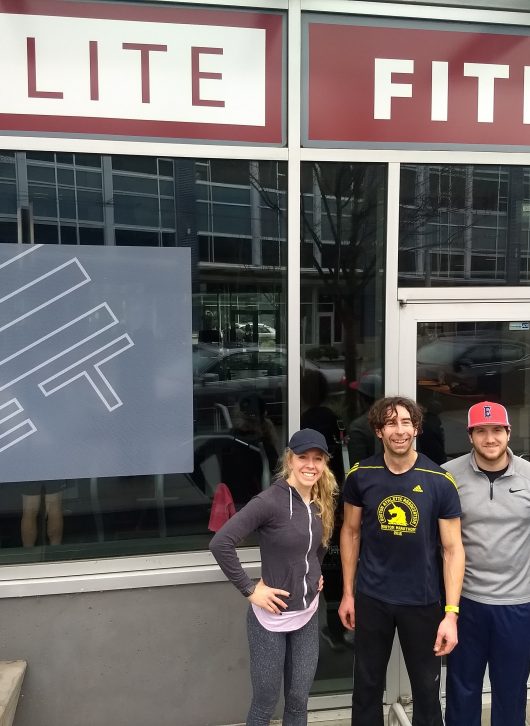 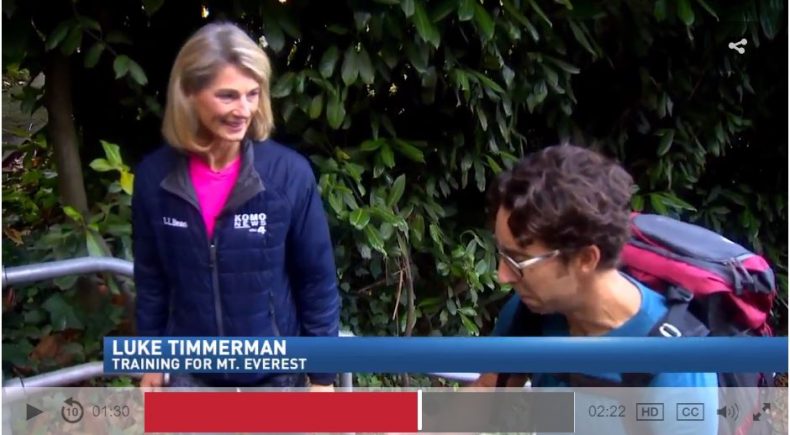 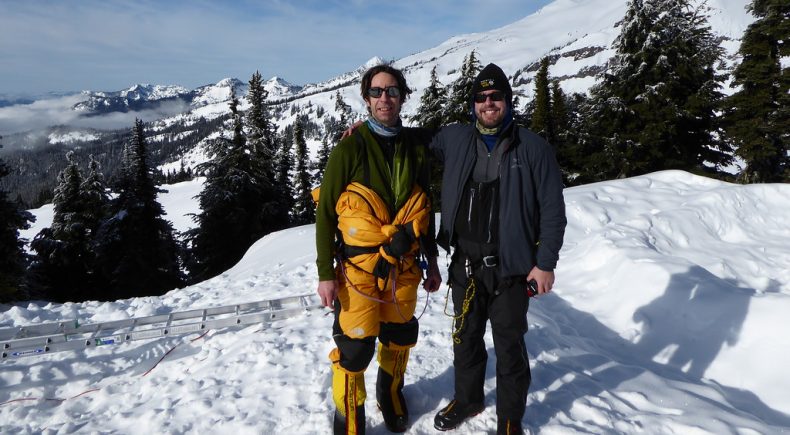 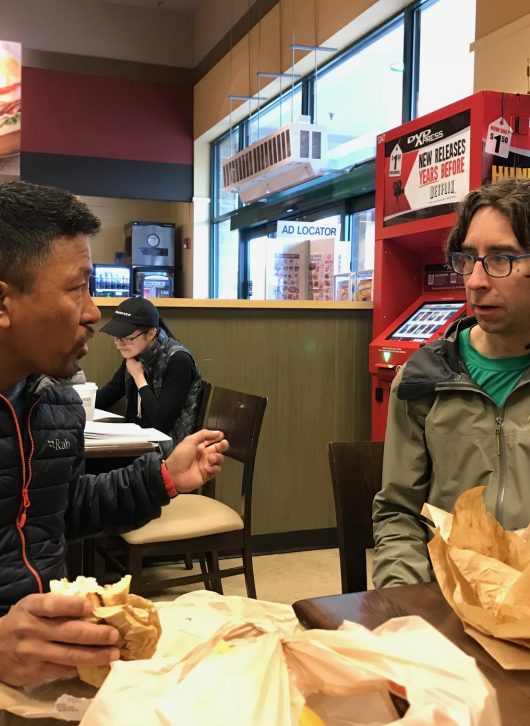 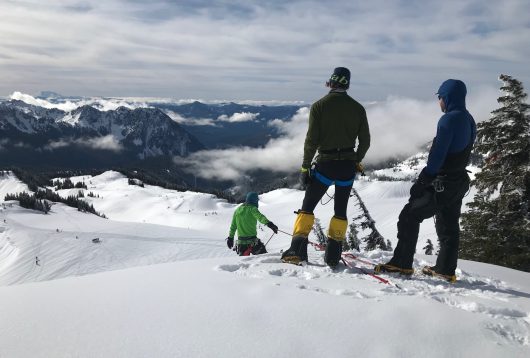 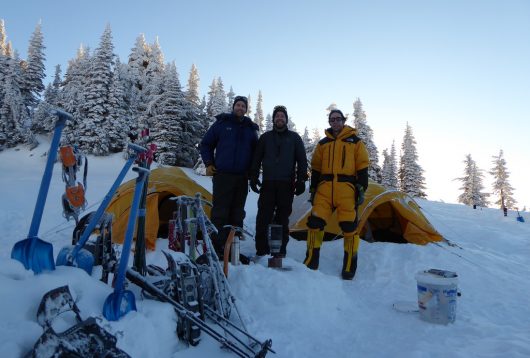 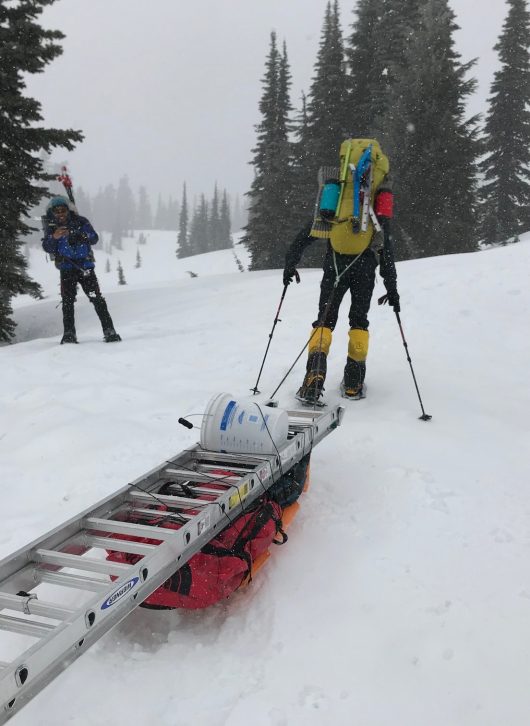 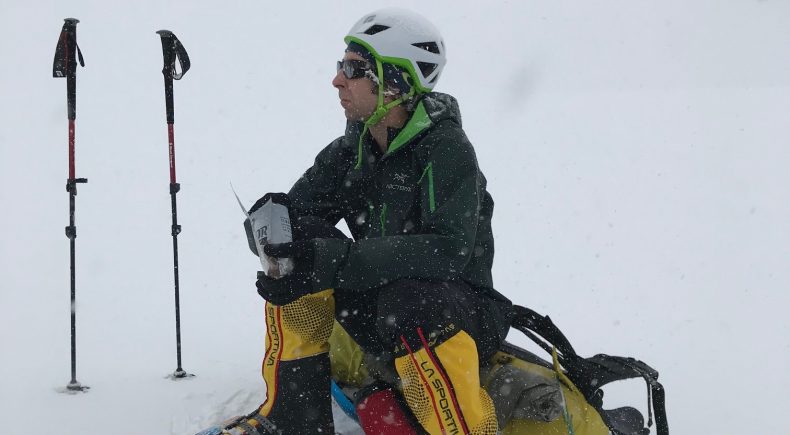 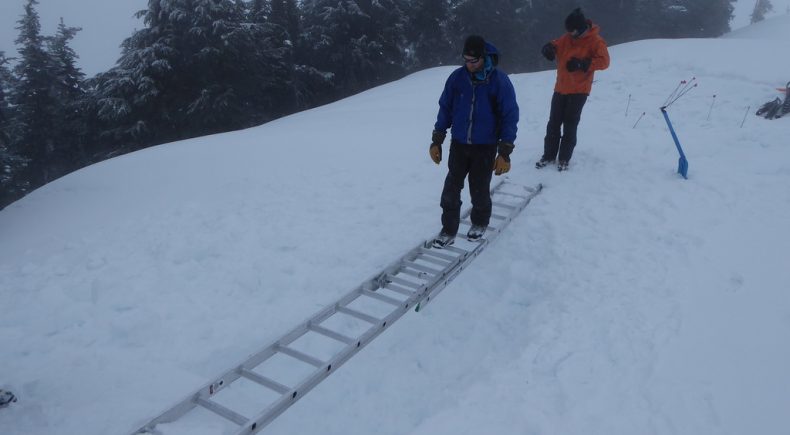 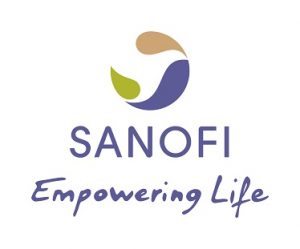 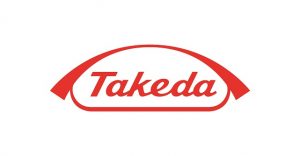 Why do you climb? Every climber is a little different. Personally, I love the natural beauty, the fresh air, the views. I love pushing myself to take on new challenges. I love the camaraderie, being off the grid, and having meaningful conversations in the tent at the end of a long day. As John Muir once said, “the mountains are calling, and I must go.”

Why do this big public fundraising campaign? This evolved over a series of conversations I had over the summer with my wife. A few months after summiting Aconcagua, the highest peak in South America, I realized I’m at a point where I’m qualified to attempt this daunting climb of Everest. But if I’m going to do it, I told her I want to do it for a good cause. At this point in my career, I’m fortunate to have a very potent national biotech network. There had to be a way, we thought, to leverage my climbing and my biotech network to benefit basic science, especially at a time when it’s under intense pressure.

Why choose Fred Hutch? Fred Hutch was an obvious place to pick as the beneficiary. They are a first-rate scientific institution, at the forefront of cancer biology. They are in my hometown of Seattle. They also have 20 years of experience managing mountaineering fundraising trips, although this is the first time a fundraiser has ever attempted an Everest summit bid.

What does your wife think of this? She was a bit hesitant about the idea at first. But she also knows I’m a cautious climber, that Alpine Ascents International is among the best guides in the business, and that the data say that the death rate is less than 2 percent in the post- “Into Thin Air” era. This is largely because of the advent of improved weather forecasting technology. She’s very supportive, and proud of the fundraising effort.

Holy mackerel, that’s a long time. Does it really take that long? Yes, it’s a full 10 weeks. You spend the first couple weeks trekking along through Himalayan villages, stopping at tea houses, meeting with the gracious Nepalese hosts, and slowly acclimating your body to the altitude. The body needs time to start producing more oxygen-carrying red blood cells that are needed to function at reasonable efficiency up high.

What do you do for all of April? We will spend a lot of time at Base Camp, as the body needs time to acclimate to the altitude, to start producing more oxygen-carrying red blood cells. We will also do training climbs, and gradually establish a series of higher camps on the mountain.

When is the summit window of opportunity? Between roughly May 10-25, depending on the weather. This is the only time of year people attempt summit bids, as the weather is too hostile at other times.

Did you read that New York Times article? Yes. The deaths described there are a tragedy. But the decisions made in that article are no reflection of the kind of climbing I have done, and certainly not consistent with the way my guide service operates. If my guide says it’s time to turn around, whether it’s for an individual or the team, then you turn around. The End. I do not suffer from “summit fever” that sometimes causes expeditions to go awry. I’m a believer in what American mountaineering legend Ed Viesturs is commonly quoted as saying: “Getting to the top is optional. Getting down is mandatory.”

Isn’t this risky?  Yes. I also have a lot of experience dating back to 2004. I’ve summitted all the major Cascade peaks, many in the Sierra Nevada, and the highest mountains in North and South America (Denali and Aconcagua).

Don’t people die on Everest?  Yes. Avalanches, earthquakes, and rockfalls are objective hazards that can happen. The death rate was 1.9% between 2000 and 2015, lowered by improved weather forecasting technology.

Are you scared? I’m not scared of the things most people imagine, like falling into a crevasse or freezing to death. I am, however, a little intimidated. I know how demanding it will be to climb the world’s highest peak, how the body’s many systems feel at extreme altitude (short answer: not good). But the grueling physical and mental training I’m doing is preparing me for the suffering, and building my confidence.

How much of the money raised is going to cancer research?  I secured sponsorship to cover all the climbing fees upfront. I’m also paying for all my personal expenses — the flight to Kathmandu, extra climbing gear, personal training, trip insurance, and journalistic labor for Timmerman Report while I’m away. All the donations collected will go directly toward supporting cancer research at Fred Hutch.

Which route are you taking?  The South Col Route from Nepal.

Who are you going with? Alpine Ascents International, one of the best guide services in the business. One of the guides, Jangbu Sherpa, was my lead guide on Aconcagua. Expedition leader Ben Jones is a superstar on Everest, renowned for his judgment, safety record and for being an all-around great guy. Take a look at his climbing resume here.

How many people are in the group? There will be 9 clients like me from around the world, three guides, and about a dozen Sherpa support staff.

How are you training?  Running in the morning, bicycling to and from work, and most importantly, carrying a training backpack uphill. Elite Fitness NW has also developed a custom workout plan for me to do twice a week. I’m also carrying my training backpack on Mt. Si and Mailbox Peak, a couple of popular hikes east of Seattle, on weekends. Sometimes, my 42-pound daughter rides on my back in a kiddie backpack. My favorite new book is “Training for the New Alpinism” by Steve House and Scott Johnston (Patagonia Books, 2014).

Are you going to blog or livestream the climb? No. I am going to be 100 percent focused on getting up and down the mountain safely, experiencing Himalayan culture, and being a good teammate. I like being “off the grid” when in the mountains, leaving time to read and think and have meaningful conversations. I don’t want to read my email and Twitter feed at Base Camp. I will, however, take an old-fashioned pen and notebook and write in my own journal. I will carry a camera. There will be a wealth of material for articles, slideshows, and talks afterwards.

How can I follow the progress of the climb? The guides carry satellite phones for emergencies. Alpine Ascents will provide brief progress reports from our team, with text, photos, and audio uploaded on WiFi at Base Camp, and posted to the Alpine Ascents website. I’ll probably speak on the satellite phone briefly on occasion for family and friends keeping tabs on the climb.

I’m carrying my 80-pound training backpack, up and down the hills of Seattle, for a reason.

I’m training to climb Mt. Everest, the highest mountain in the world, in 2018.

Of course, I love the mountains.

As a biotech journalist for 15 years, I’ve had the privilege to meet scientists around the country doing amazing work. I see a cancer revolution happening. Immunotherapies are emerging that harness the power of the immune system to attack cancer cells much like the viruses and bacteria that we fight off every day. Fast DNA sequencers and other sensitive instruments are making it possible to detect cancer earlier than ever before, when it’s most easily treated.

Fred Hutch is at the leading edge of cancer cures. Their pioneering research is helping people with many types of cancer live longer, and lead better lives. We’re seeing just the beginning of what is possible.

We can’t let up — especially during this time of so much thrilling progress.

So I ask you to please give generously to this important cause at a crucial moment in time.

Let’s take this all the way. Donate to the Climb to Fight Cancer at Fred Hutch, and you’ll help scientists push to the top of the mountain – the cure.