Technology companies are experiencing a staggering reversal of reputational (though not financial) fortune; their stature seems reduced with each successive news cycle.  Gone is the halo many tech companies once enjoyed.

The implicit (and often explicit) assumption that tech innovation inevitably makes the world a better place has been replaced by real concerns that the picture may be far more mixed, a skeptical reaction that’s been called the “techlash.”

Profound privacy worries abound — not surprising, given that the underlying business model of several leading companies is hoovering up all your personal information and using these data to precisely target ads. While behavior modification has always been the goal of advertising, we are only just beginning to see what the world looks like when precision-targeted digital advertising (of products, political campaigns etc.) becomes strikingly effective at influencing individual and group behavior.  (If only precision medicine was nearly as effective!).

The idea that we should aspire to measure everything everywhere about everyone all the time, as some digital transformers cheerfully advocate, seems an increasingly questionable goal. The surveillance aspects, we now understand, are overtly invasive, while the benefits to the surveilled seem uncertain at best.

The Wall Street Journal recently profiled a lobbyist for Oracle with a knack for providing real-time demonstrations of just how much data Oracle rivals like Google routinely collect.  During one meeting with Australian regulators, according to the Journal, an official noted that the Google operating system on a phone “was running for 13 minutes while we had been meeting, and had talked to Google at least 418 times….Second by second sensor readings, going straight to Google.”

One can’t help but wonder: What are Google and other data-hungry companies doing with our information – and who else may be accessing it?

The incredibly detailed information gathered by large tech companies enables them to sell precisely targeted ads. The ability they have to measure engagement so effectively makes it easier to iteratively optimize such messaging, an approach that has now become an important component of political campaigns.  Deepa Seetharaman, writing in the Journal, recently described how the Trump campaign learned how to leverage social media remarkably effectively in 2016 (this episode of The Journal podcast especially recommended), and a captivating Atlantic piece “The Billion Dollar Disinformation Campaign to Re-elect the President” by McKay Coppins suggests these approaches will be an even larger factor in the 2020 campaign (as Coppins discusses in this episode of The Bulwark podcast).

While platforms selling ads clearly benefit by capturing rich data from apps and devices, the upside for users is debatable – even when users are the ones capturing the information for themselves.

Consider the experience of many quantified selfers, such as former Wired editor Chris Anderson.  “After many years of self-tracking everything (activity, work, sleep),” he tweeted in 2016, “I’ve decided it’s ~pointless. No non-obvious lessons or incentives :(”.

We have also seen how technology, even where successful along some dimensions, can generate significant unanticipated consequences, including exacerbating problems they promised to solve.  One conspicuous example: ride-sharing apps like Uber and Lyft promised to reduce traffic burden, yet data suggest these apps have actually made traffic worse, according to fascinating recent article by Eliot Brown in the Journal. Brown also cites Facebook and Juul as other “solutions” that seem to have created serious new problems.

For those seeking to bring technology to health, the concerns surfaced by the techlash are not surprising, considering the historical arc of technology adoption, and need not staunch progress, if we respond thoughtfully rather than reflexively to these developments.

As Carlota Perez has described (see here), the path of novel technologies from initial emergence to widespread adoption seems to follow a predictable contour, which includes considerable hype and energy towards the start, as it becomes clear that there’s likely “something” to the technology but it’s not yet clear what this “something” is or might be.

The British economist Christopher Freeman, in his introduction to Perez’s 2002 book, wrote, “the uncertainty which inevitably accompanies such revolutionary developments, means that many of the early expectations will be disappointed, leading to the collapse of bubbles created by financial speculation as well as technological euphoria or ‘irrational exuberance.’”

In the Perez scheme, such disappointment regularly precedes the point at which the technology starts to become stably integrated in institutions and gains widespread acceptance, and it’s likely that we’ll see the same phenomenon with the application to healthcare of the four technology vectors entrepreneur Tom Siebel associates with digital transformation: cloud, big data, AI, and internet of things (IoT), as I recently discussed.

Arguably the best news about the increasingly pervasive concerns about technology is the grounded and often difficult dialog it forces about the range of consequences. In today’s more skeptical climate, it’s acceptable to view new technologies through a lens of healthy skepticism without being tarred as a mere “luddite,” a non-“it-getter,” and an exemplar of the sort of stodgy old-school thinking that’s about to be disrupted and displaced.

What we desperately need is authentic engagement between health and tech, from a position of mutual respect.  This theme has emerged from a number of recent conversations I’ve had, including just this past Friday, at a fireside chat I conducted in Philadelphia at the 2020 Wharton Health Care Conference with FDA Deputy Director Amy Abernethy, who has considerable experience bringing these worlds together – in academia, industry, and now government. 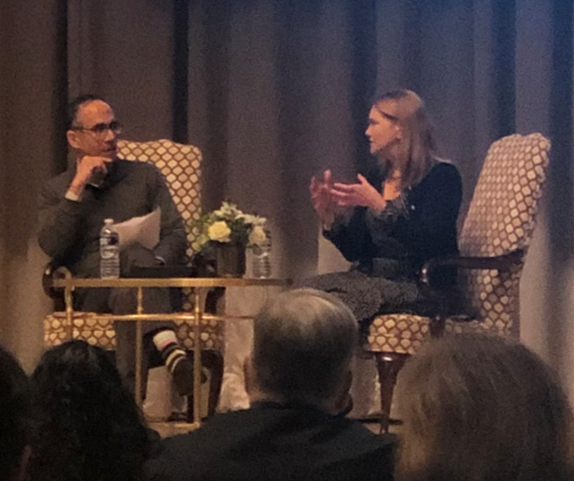 My key takeaway from Abernethy – and others, including Recursion CEO Chris Gibson and Brandon Allgood, CTO of Numerate (now Integral Health) (the three of us discussed effective health/tech collaboration in January in San Francisco at a pre-JPM panel I moderated at the East/West CEO Conference), and J&J’s Sean Khozin (listen to our recent Tech Tonics podcast) – is the urgent need to get the working relationship between health talent and tech talent right, ideally by avoiding a “vendor mentality,” and ensuring the key stakeholders are on equal footing.

Getting health and tech experts collaborating effectively remains a critical stuck point for successful integration of health and technology – and arguably may represent an area where startups have a significant advantage.  Generally speaking, in tech companies, engineers are dominant, and many non-engineers, including physicians, tend to feel like second-class citizens; I hear this all the time from physicians and life-scientists connected with large tech companies, as well as tech-driven health startups.

In many hospitals, the situation tends to be reversed, with physicians dominant in the hierarchy, and tech experts relegated to the role of service providers.  In pharma R&D, drug hunters and developers tend to rule the roost; the key data experts, statisticians, while acknowledged to be essential, are too often treated as service functions, called in to crunch numbers for sample size calculations, say, then sent back to their cubicles. (Of course there are exceptions, but this is the recurrent power dynamic I’ve seen throughout the industry.)

When one tribe is clearly dominant, it creates conditions that make it difficult to have thoughtful, dynamic back-and-forth between professionals of complementary skills. Without true mutual respect for what people bring to the table, it’s hard to imagine tackling effectively the highly complex problems at the nexus of health and tech.

Solving this problem isn’t going to be easy, given the reluctance of those with power to relinquish it, but mutual authentic recognition of the value of both perspectives will go a long way.

In our conversation at Wharton, Abernethy described an approach from Flatiron that she thought was effective: hackathons (internal software development competitions) where each team had to include not just programmers but also domain experts, whose knowledge was critical for success.

The idea, more broadly, is that as people work together towards shared goals, their distinct skills become far more appreciated, and collaboration far more valued.  Right now, this is most apparent in startups (where the success of each person vitally depends upon everyone pulling in the same direction), while large organizations tend to be characterized by lip service to collaboration (especially when it’s a C-suite directive – see here, here), but intrinsic resistance to change, especially change that seems threatening or pointless.  From the perspective of many entrenched stakeholders in pharma and in healthcare systems, the change that “digital transformation” champions seems to offer a bit of both.

On the other hand, the folks I know in pharma R&D are there because they want to create impactful medicines to help patients; the people I know in care systems truly aspire to help patients. But all these experienced stakeholders – understandably — are very skeptical about grandiose promises; health and disease are inordinately complicated, and durably improving either drug discovery or care delivery is far more challenging than those outside these systems tend to recognize or acknowledge.

Progress at the intersection of health and technology is achievable, but will also require established stakeholders and technology developers to collaborate effectively and respectfully, and evolve practical, tangible solutions.  As sociologist Robert Nisbet presciently wrote over a half century ago, “human beings do not come together to be together: they come to do something together.”  In this spirit, successful partnership between health and tech experts seems most likely to occur not just by co-locating such collaborators in a building or on a team, but rather, when the concerted engagement of both is required to accomplish something both meaningful and difficult.

I’m confident we will begin to see real success stories here – there are just too many real opportunities for just this sort of collaboration.  The interesting question is whether the biggest strides will come from legacy organizations that have managed to “digitally transform,” despite the huge political hurdles, or from startups that have managed to achieve traction despite the lack of legacy relationships and established capabilities. I would love to see both – and at this point, would be happy to see either.