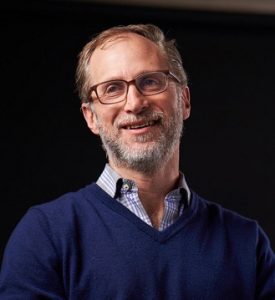 The week things got really interesting was the week of March 16.

That’s when Sara Cody, the Santa Clara County public health officer, and her legion of public health heroes made the gutsy call – the first of its kind in the nation — to shut things down in the entire 6-county San Francisco Bay Area, home to more than 6 million people. Only two deaths from COVID-19 had been reported at the time. She stuck her neck out there, saying we had to get in front of this pandemic, or else.

That same week, I had agreed to cover the inpatient service for a colleague at UCSF who was advised to avoid the hospital by their physician.

I’m a cardiologist, not an ER doctor. I remember feeling intense uncertainty and fear – mostly fear of the unknown. Everything was eerie and everyone was anxious. We all expected the hospital to be overrun by the weekend. That was how it had happened elsewhere.

When I actually got into the hospital, my fears faded. I got busy and distracted, which created a weird sort of calm. We were just waiting for the surge. I was comforted by how prepared everyone and everything was. Sure, there was concern over lack of PPE, but mostly people were feeling good and seemed focused. There were tons of empty beds. It seemed like we were ready even despite the strange act of waiting for disaster. I don’t remember ever feeling that way before.

And then nothing happened. By the end of the first weekend, the residents were asking for teaching – from me. They were bored. I’ll admit that I started to wonder how long we’d have to wait to know if the surge might not be coming. I was counting days from the lockdown on Mar. 16. I didn’t talk about it at first but I definitely started thinking. No one wants to be overconfident, in that “famous last words” sense.

By the next weekend, I was comfortable to talk about how we were doing well at UCSF. I got this text from a friend on Mar. 26:

“how bad is SF rn? seems quieter compared to nyc”

“It is quieter,” I responded. “I believe that is meaningful. They are still expecting a big surge and are opening closed hospitals, but with each passing day, I get more optimistic. We are now 11 days into the quasi-lockdown, and there has been very little sign of badness at least at our hospital”.

We all played this game for a few more weeks while we were told the surge was coming but it was clear it was not. At the same time, it was clear that other parts of the country were being devastated.

On Mar. 20, I sent this tweet: “I don’t mean this in any other way except genuine concern but I am very worried about what is happening in NY”.

My colleagues and I watched the heartbreaking news from New York like everyone else.

Toward the beginning of April, I started to ask when we would consider sending people from UCSF to help in New York hospitals or to other hard-hit areas. I was told it was too soon. Then on Apr. 10, I tweeted: “Wow @UCSF is sending a team of clinicians to NY tomorrow for a month!”

I was happy. I was happy for New York. They so desperately needed the help. I had talked to friends and colleagues there. They were depleted and tired in every sense of the word. I was also happy for my colleagues – but honestly, I was also jealous.

I was busy. Not busy helping out in the ER at UCSF Medical Center, fortunately. But I was as busy as I have ever been, balancing seeing patients on Zoom with writing papers and grants while also trying to help guide this nascent startup I had helped found just a year and half ago. And then I got very caught up in the story about thrombosis and COVID-19 and have been working on helping to spin up at least two clinical trials to see if anticoagulant therapy could be helpful.

And of course at home, while my two daughters are mostly self-sufficient, there was plenty of work to be done. My wife’s business has been decimated. We are all crowded into a small house and we are doing things we don’t usually do (like clean). There were some amazing upsides and the most notable was spending so much time with the three people that mean the most to me on this planet. One of the most surprising daily joys was making and eating lunch as a family. It feels very European.

But despite all that, I still felt drawn to New York. I mentioned it at a faculty meeting a few weeks ago and was told there was no need for us. Then I heard UCSF was actually going to send a second team and they were asking for volunteers from Cardiology.

I spent at least 24 hours thinking about it. I tried hard to think about all the many reasons I wanted to go and tried as best I could to think about how much was motivated by a genuine sense of mission or perhaps a desire to be in the middle of the action or maybe even from a little envy of my colleagues or maybe even just curiosity or attention-seeking.

I wrestled with it. I finally asked my wife. I reassured her that I was not worried from a health perspective and that I’d be careful. I also acknowledged that it would be a tremendous burden on her to have to parent alone for two weeks in this absurd time, when she’s naturally stressed about her business and the kids are at home all the time. But I also said that everything else could wait. I reminded her that we had planned to take a two-week vacation to Japan in June and that I had numerous meetings and they had all been cancelled and that it was actually a very good time to go in many ways. My lab is basically closed. Most other activities are slow or non-existent. The startup is making it. And the thrombosis trials would/could go on without me.

We also talked about my motives. She grilled me about why I wanted to go, and I told her that I was not entirely sure, but I also told her that I was hearing a dog whistle and it was driving me mad. However, I also said I could not go without her support – her genuine support. After a short time, she looked me in the eye and said, “Ethan, you have to go.”

This “dog whistle” is a mysterious thing to explain. It’s some kind of call of duty, like a ghost of a first-year med school professor whispering in my ear to go. No one is explicitly calling on me, as if I have to go do this. But maybe there’s a little guilt implication in some conversations, as if to say “hmm, wonder why you aren’t getting on a plane to come to New York?”

So I told Jeff Olgin, my division chief, that I wanted to go. He connected me with Michelle Mourad who was managing the process here. By Wednesday, I was credentialed and licensed with maybe 10 minutes of work on my part. Do I have a medical license? Check. It was spectacular.

By Friday, we had a flight scheduled and had an orientation call with the hospital in New York where we are headed.

This morning, Apr. 25, three amazing women joined me in a desolate SFO airport and we boarded a plane. There was a very nice little ceremony. Mark Laret, the CEO of UCSF Health, came and gave a short talk. Sam Hawgood, our chancellor was there, as was Josh Adler and also Kim Murphy, the Director, Special Events & Community Relations at UCSF Health and the person who organized all this.

As our team of four medical personnel gathered in the jetway, we all muttered to each other about how uncomfortable we were with the pomp and circumstance. We just wanted to get there. We wanted to get to work. When we finally got on the plane, we found many other health care practitioners of many stripes from around the Bay Area – ALL of whom were volunteering to go work in NYC. Nobody gave them a ceremony.

So this brings me to the tension I have over the attention doing something like this might bring. I don’t want it to be about me. None of us does. But I also think there is value in telling the story. I think there is value in telling people about how I decided to come, how I feel and some of what I see. I don’t know too much about what I am going to do. I found out yesterday that I will be an attending physician in what used to be a cardiac ICU but that has been transformed (like all ICUs in NY) into a COVID ICU.

I’m not scared of getting sick. I am uneasy about how brutal it will be, tending to wave after seemingly endless wave of critically ill patients. But I will try to stay focused on the task.

What really bothers me is that “first day of school” fear. It’s a lot like how I felt 20 years ago when I came back from the lab to do my clinical fellowship. Will I know what to do? How do I manage a ventilator or volume status? Can I still put in a central line, and will I need to? My wife reminded me this morning on the way to the airport that it’s like riding a bike. But I also have not worked at a new hospital since 2001, so I am feeling uneasy and unsure of myself. There could be slightly different equipment, procedures, colleagues who have already been through the ringer and are moving at warp speed, while I’m trying to get up to speed.

However, all of that is balanced by a strong desire to get in there and get to work. I am excited to learn, to see, to make myself useful.

I’m slightly surprised by the emotions. I did not expect tears at the airport this morning. Ultimately, I am going to miss my family desperately. There is nothing I will ever be able to do to repay them for letting me go and answer this dog whistle.

Over the next two weeks, I will try to write occasionally about my experiences. If I do this right, it will foster a little more understanding of what it’s like on the frontlines. Those of you who know me know that I will be honest and raw and maybe even sometimes crass. But I have such tremendous respect for how people have pulled together to contribute whatever way they can in this wicked moment. This challenge is vastly bigger than any individual effort. I have been trying to remember to thank everyone who has a role to play — from the TSA agents to the custodial staff to the flight attendants (even if they are not serving coffee on this flight!).

It is precisely at times like this that I remember the lesson my Dad taught me when I started my first clinical rotation in medical school now 27 years ago: always appreciate and thank everyone – everyone and most importantly the people who never get thanked.

Now more than ever, there should be no thankless jobs. Everyone has their purpose, everyone is answering a different kind of dog whistle.