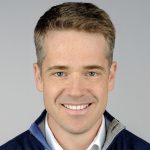 Back in March — during the first wave — I reflected on the COVID-19 situation in Switzerland. This small country, at that time, was managing its outbreak and quickly getting it under control.

This was just as the federal government had begun coordinating a response, which had previously been left to local authorities. As I mentioned back then, while Switzerland is rarely the first to take measures or adopt something new, when the country does, it tends to take action extremely well.

Switzerland never formally and fully locked down, but the population adhered to the social distancing rules. And the results spoke for themselves — the numbers during May and the early summer faded to nearly insignificant digits. Switzerland’s flattened curve became the envy of many European countries. 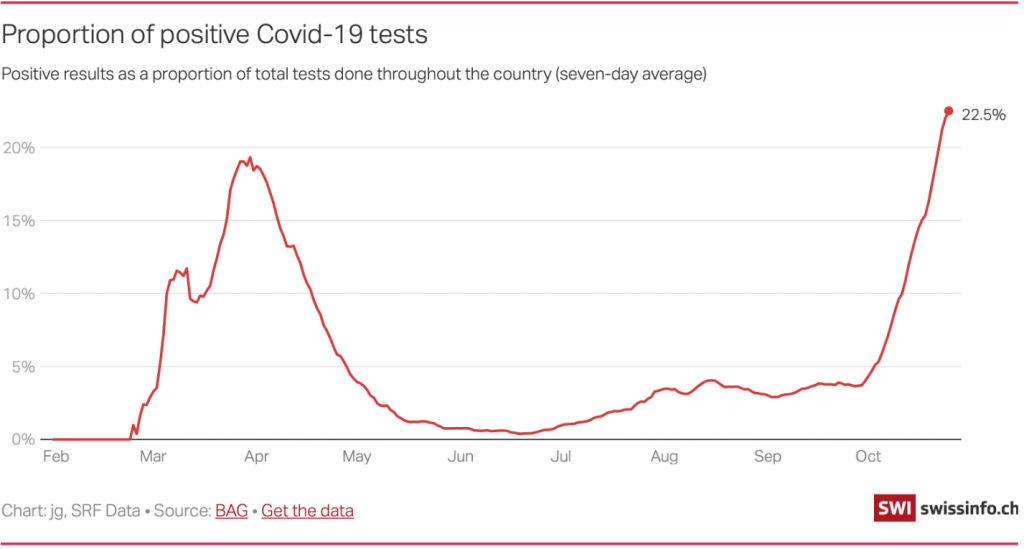 While many Swiss citizens had cancelled the summer holidays they had planned to beautiful locations all around Europe, most (including me!) regretted doing so when the summer arrived and almost seemed — well — sort of normal. Perhaps a bit too normal.

The youth took the opportunity and enjoyed the warm sunny weather in Switzerland, hanging out with friends on the beautiful rivers, lake shores, and mountain resorts. And who would blame them after such a spring?

The mountain resorts recorded strong occupancy in the summer months. It almost seemed like most of Europe decided that hiking in the Swiss mountains might be a reasonable vacation destination, where social distancing — if needed — might be easier. Outdoor and camping equipment became extremely popular purchases.

And while some social distancing and hygiene measures certainly persisted, very few wore masks (except on public transport), as the federal government also returned the power back to the 26 local authorities – known as cantons. Each canton implemented its own measures — or lack of — which could be well justified as the case numbers remained low.

In August and September the numbers started creeping up. Cases rose particularly among the 20-29 year old age group. The famous R-value crept up and hovered just above 1, but after some weeks of increase, there were also brief periods of decreasing case numbers. Were we controlling the situation due to our heightened sensitivity, education and Swiss-efficiency hand washing?

Schools re-opened and mask wearing was still minimal. That changed when some cantons, such as Basel Stadt and a few others, reintroduced masks in supermarkets and shops but not in all public areas. Surprisingly, some cantons didn’t require masks in most public areas. The number of new cases was steadily increasing, but the curve was still pretty flat.

Since most of the cases were in young people, there was very little added pressure being put on hospitals. But even if corrected by age-group, the hospitalization and mortality rate looked much better now than it did during the initial first wave. Doctors were learning how to better treat patients in the hospital, and a couple of new medicines – dexamethasone and remdesivir – were available for those in need. Things seemed to be relatively under control.

Then the autumn school holiday break arrived. Again, the mountain resorts were packed. In many areas mask wearing was minimal. With cooling temperatures, guests were enjoying their meals or afternoon refreshments indoors or in mountain huts. Northern Italy was also a popular destination as the numbers there were even lower than in some parts of Switzerland — so why not go? You’ll never see Venice with this few tourists!

About two weeks later,  cases shot up sharply. Suddenly, we saw a switch from local clusters of COVID-19 to a nationwide surge of cases. Hospitalizations spiked. 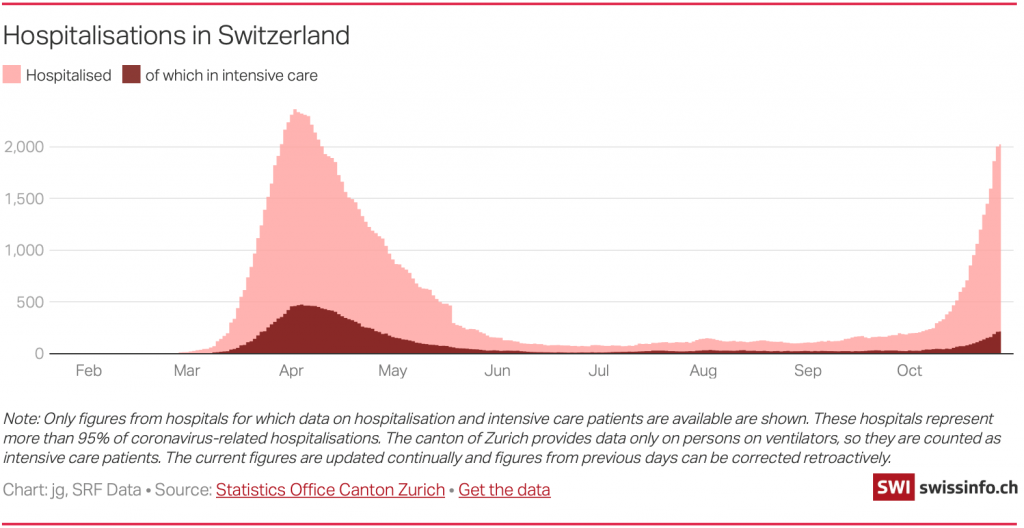 What were the factors driving this new nationwide spread?

Within two weeks, Switzerland went from one of the best in Europe to one of the worst, eclipsing the UK, Spain, the Netherlands and also France in new cases per 100K inhabitants.

While this was important, I could not help notice that many other European countries had already taken these measures, or even tougher ones, a while ago.

On Wednesday, Oct. 28, the federal government announced further measures, such as requirement for mask wearing in certain public open-air areas, early closing times for bars and restaurants and further limitations for gatherings of certain group sizes. Rapid Covid-19 tests will also be rolled out.

The federal government stopped short of the anticipated “circuit breaker lock downs” that may still yet be implemented next to help flatten the curve as cases are spreading into higher age groups and hospital occupancy is going up.

The number of deaths, which usually increases a few weeks after a surge in new cases, is unfortunately once again following this sad, predictable pattern. 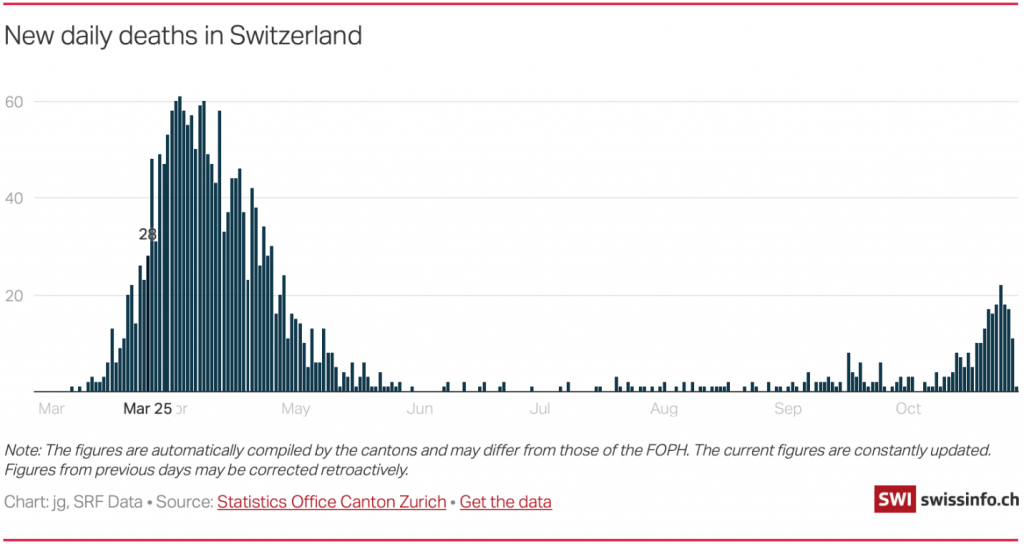 It is hard to know if too little is being done too late. The lack of measures and discipline in the summer are certainly an issue, but also understandable given the very low numbers of infections at the time. It’s difficult for people to remain vigilant when the threat isn’t visible.

The next weeks and months look to be a bumpy ride. We must do everything now to get this back to some reasonable control. But once again I have faith in my fellow citizens that with good discipline and by working together (albeit socially distanced!) we can hopefully manage this next wave as well or even better than the last.

My hope is that with our united best efforts over the next months and, at some point next year with the aid of emerging vaccines, new drugs, further refinement of treatment protocols, and perhaps a bit of “earlier than expected herd immunity” we can get on top of this virus.

If we do, we can eventually start the Roaring Twenties of this millennium.