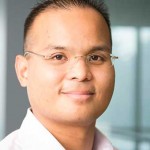 “I’m gonna have the halibut and chips. And a medium vanilla milkshake. What about you, Thong?”

I looked up at my towering companion as he peered down at me with a gentle smile. I’m about 5-foot-8, and he was about 6-foot-7. I quickly scanned the menu board, then made my choice.

“You know, Mr. Gates, I think I’m going to have the exact same thing that you’re having.”

“Please, Thong, call me Bill. And lunch is on me.”  Unbeknownst to Mr. Gates (or to me for that matter), that first lunch meeting more than 20 years ago at Daly’s Drive-In, a burger joint in Seattle’s Eastlake neighborhood, would inspire me and alter the trajectory of my career.

As many know, Mr. Gates was a giant among giants. A tall and imposing figure, he made many lasting contributions to the communities that he so graciously served. He served our country during World War II, he established a prominent law firm (now known as K&L Gates), and he has given generously of his time and resources to help countless community organizations focused on global health, education, and the arts. His leadership at the Bill & Melinda Gates Foundation propelled the Foundation to tackle some of the world’s most pressing issues in global health and education, and to create better opportunities for the poor and vulnerable around the world.

Mr. Gates was also very forward-thinking when it came to the relationship between university research and its potential to catalyze progress. Shortly after the passage of the Bayh-Dole Act in 1980, he saw potential for the University of Washington to translate some of its research for the wider world. Not surprisingly, given his position in the community and his legal acumen, he played a seminal role in developing policies, initiatives, and a successful foundation dedicated to promoting and advancing technology commercialization in the region.

These accomplishments are substantial for any single individual, but they represent only a portion of the impact that Mr. Gates had on folks like me who were fortunate to cross his path. Beyond the highly visible ways he made an impact – like serving on Boards or leading fundraising campaigns – Mr. Gates also took a lot of time to meet with individuals like my younger self.

As generous as he was with his philanthropy, he was even more generous with his wisdom and counsel. He took an interest in hearing the stories behind an individual, and he went out of his way to open doors and inspire a spirit of selfless giving.

My story was one of the ones that seemed to have resonated with Mr. Gates. You see, I had no direct connection to him or to the many organizations that he was affiliated with. At the time, I was a young kid who had found the beginnings of a path to a better life. My parents had immigrated to this country from Vietnam at the end of the war while my mother was still pregnant with me. Upon arriving, my father was unable to find work to support the family, especially given his (then) limited grasp of the English language. He took jobs as a janitor and then as a television repairman in order to make ends meet.

As time went on, my father continued to strengthen his English, and began taking courses at a local community college. That helped him to land a job as a social worker, where he worked for more than 30 years to support our family of six. While we had little materially, because of my father’s example, we possessed a commitment to hard work, perseverance, and education.

Those family commitments led me to excelling in school, and eventually attending Harvard where I developed an interest in science and business. Those interests led me to join a biotech-focused management consulting firm after college that gave me the tools to solve difficult business problems. I also threw my energies behind a start-up company that I co-founded, which taught me what it meant to sacrifice everything to build something new.

With the help of a business colleague whom I met through my management consulting work, I was able to obtain the contact information for Mr. Gates. I reached out to him, hoping he’d be interested in helping someone like me.

At that lunch meeting, Mr. Gates listened carefully, and wisely counseled me to look past the hardships of my past and to look ahead to the future. He encouraged me to focus on the positive, and to not dwell on those that took advantage of me. He advised me to surround myself with people that were mission-driven and full of integrity. And he inspired me to consider possibilities that I might not have otherwise considered, especially local ones in a growing Seattle sector. Seeing that my mind was full of questions about “where” and “when”, Mr. Gates was able to provide a lens to focus my passions and experiences to the “here” and “now.”

Were it not for Mr. Gates, I never would have made the connections that ultimately led me to join the team at Washington Research Foundation (WRF), a non-profit organization that Mr. Gates co-founded to translate university research into the business world, and which plowed back its proceeds into supporting scholarship and more research in Washington-based research institutions.

I joined WRF’s investment team (known as WRF Capital) in June 2000 — a few months after our lunch at Daly’s. Over the next 14+ years, I was fortunate to work alongside a team of talented professionals at WRF to identify and invest in breakthrough technologies. By the time I decided to leave WRF to lead Accelerator Life Science Partners, WRF’s collective efforts — through intellectual property licensing, returns from successful start-up investments, and philanthropy — had returned more than $500 million to the University of Washington alone. WRF’s impact in the region continues to this day, and I’m proud to have contributed to WRF’s successes as an organization.

My father died about 10 years ago. Before he passed away, he shared with my brothers and sister the story of his life leading up to his decision to risk everything at the end of the Vietnam War to immigrate to this country. And he shared with us a Vietnamese proverb that essentially says it is our duty and privilege to do everything we can to ensure that the lives of those we care about are better than the ones we have.

In the time that I knew him, Mr. Gates lived this philosophy out fully. Mr. Gates allowed me to stand upon his shoulders at a time when I needed it the most. He did so selflessly, without any expectation that doing so would benefit him in any way. It was only 90 minutes of his day in the spring of 2000. It didn’t cost him much. Yet that effort to inspire me and support his community in the Pacific Northwest made a very real impact.

And I know there are countless others whose stories are the same – stories about a giant of a man who did everything he could so that future generations are better off than the ones that came before.

Building Startups With Pharma Needs in Mind: Thong Le on The Long Run Podcast
Accelerator, Backed by Corporate VCs, Spreads Wings – But Not in Boston & SF