My first real journalism job flashed to mind this week.

It was 1998-1999. I was a kid reporter fresh out of the University of Wisconsin. My job was to cover Dane County government for The Capital Times, the progressive newspaper in Madison.

Dane County had about 400,000 people. Half lived in the beating liberal heart of the City of Madison – home to one of America’s great state universities and many government workers.

The Dane County executive, who I was supposed to watch like a hawk and report on daily, was a former environmental activist. The editors of my newspaper were supportive of her political positions.

I loved that job. What an education this was for 23-year-old me.

Kathleen Falk struck me as a bright and dedicated public servant. But she had her work cut out. This was a tense, pressure cooker of a job.

After years of being a legal activist on the outside, advocating fiercely and intelligently for clean water and clean air and all kinds of good environmental causes, she had weighty responsibility.

As County Executive, she had to manage the classic urban-versus-rural land use battles. Wisconsin was losing an average of 2-3 family farms per day in those years (my Mom and Dad’s family farm in Grant County included). Corporate agriculture was ascendant. Family farmers, left with no economic legs to stand on and not enough in the younger generation willing to carry on with that way of life, felt compelled to sell their land to housing developers in order to retire.

Falk had a North Star. She wanted to protect the land. But she also governed at a time when Money magazine ranked Madison as one of America’s Best Places to Live. Newcomers were coming, like it or not.

Falk had to balance competing interests — do we allow more housing subdivisions on the periphery of the City of Madison? What about rebuilding some run-down neighborhoods? Would people want to live there? Where exactly were all these new people supposed to live, anyway? How were they supposed to get to and from work, without spewing too much CO2, or jamming up the roads and disrupting the wonderful quality of life which drew people to Madison in the first place?

County Executive Falk, to my mind, never abandoned her principles. But she realized that there is another side to the story, she needed to listen, and needed to take it into account. Representing her tribe in Madison, and ignoring the rest of Dane County, wasn’t going to fly. It was her job to mediate, to carve out pragmatic solutions that both sides could live with.

This was not easy. These issues were emotionally heated with partisan rhetoric, even then.

To get anything of substance done, Falk had to work with a 39-member legislative branch, the Dane County Board. I covered their meetings that ran late into the night. Firebrand 1960s-style liberals from Madison (picture Vermont Senator Bernie Sanders) would step to the microphone and let it rip. When they were done, their counterparts from the rural parts of Dane County (picture Iowa Senator Chuck Grassley) would dish out their counterarguments, sometimes dripping with contempt about the liberals and their lack of “common sense.”

Some of these people really didn’t like each other. They’d come by the press gallery off to the side of the main chamber, and fill this reporter’s ear with gossip about how such-and-such supervisor was full of baloney, or how he or she was in the pocket of special interests.

Yet, these people had to find ways to work together to do basic things, like build and maintain roads, preserve the environment, take care of the most vulnerable citizens, and keep taxes in line with what people could stomach. Falk liked to describe her approach as “progressive policies with fiscal restraint.”

There was always the tension between individual rights and the common good. When you have a retiring farmer who’s worked hard his whole life and struggled to make a living with weak commodity crop prices, how do you tell him that he can’t sell his land to a housing developer?

What else is the farmer supposed to do?

Lord knows, our world needs activists to focus on injustice and demand change. But we’re all citizens in a democracy. We need to recognize this is a fractious country, and we have to balance competing interests. None of us is 100 percent right 100 percent of the time. None of us can win every battle. We need to seek common ground with people we strongly disagree with on some things if we want to accomplish anything.

Falk did her best. She clearly disappointed friends on the left at times. She never won over her skeptics on the right. But when she announced her retirement in 2010, as the longest-running Dane County Executive ever, a local newspaper wrote:

Part of what played into her decision to step down is the fact she fulfilled the two promises she made when re-elected in April 2009: building the nation’s first community manure digester and launching real cultural change around the big costs and wholesale suffering from the community’s abuse of alcohol.

“Getting this manure digester and changing the paradigm of how we clean up our lakes was very important, and I am really proud that we have broken ground on that and will be flipping the switch in a few months,” Falk said.

That’s no punch line. Building a manure digester means dealing with waste from farm livestock in a way that allows farmers to continue making a living, while keeping Dane County’s beloved lakes clean.

That’s smart problem-solving, smart balancing of competing interests. This is what we want, and what we should demand, from our more competent public representatives.

We are in a very dark chapter in our country’s history, worse even than the Red Scare of the 1950s McCarthy era. We can’t go on like this.

I grew up in Wisconsin and still have friends and family there. Some are staunch conservatives. There are things on which I will not yield, and which they won’t either. But we do have things in common.

This might take the rest of our lives to dig ourselves out of this ditch, and get our society back on a stable footing. Our society isn’t structured this way in the social media era, but if we talk less, listen more, and assume good faith from others, we can work together again and start solving some of our biggest problems.

Boston-based Atea Pharmaceuticals, a developer of antiviral therapies, raised $300 million in an IPO at $24 a share.

Seattle-based Icosavax secured $16.5 million in financing, including a $10 million grant from the Bill & Melinda Gates Foundation, to advance work on a virus-like particle approach to a COVID-19 vaccine.

Sanofi agreed to acquire Netherlands-based Kiadis Pharma for 308 million EUR. The company is developing an off the shelf’ K-NK cell technology platform.

FDA staff issued briefing documents for an advisory committee hearing on Biogen’s aducanumab treatment for Alzheimer’s disease. The staff review was surprisingly positive of the application, especially since FDA reviewers tend to raise pointed questions and (appropriately) probe for weaknesses in sponsor presentation. The FDA advisory committee will review the data presented on Friday Nov. 6, and the staff deadline to review the application is in March. Biogen shares surged (chart below) on what looks like a surprisingly easy pass from the FDA. 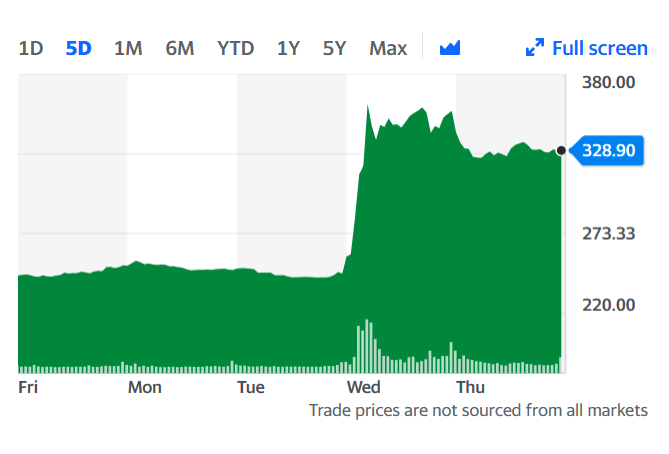 Philip Lee, a former chancellor of UCSF and an assistant secretary of health during the critical early days of Medicare, died at 96. Reading obituaries like this, of people who you’ve never heard of but who lived meaningful lives, is the kind of thing that can restore one’s faith in humanity. These people exist in our country, even if they tend not to attract the lion’s share of attention.

Novavax added Gregg Alton, the veteran biotech executive formerly of Gilead Sciences, to its board of directors.

South San Francisco-based Allogene Therapeutics reported on some preliminary Phase I dose-escalation data from its anti-BCMA cell therapy. Four out of 17 patients (24 percent) had Grade 3 or 4 (severe) infections.

The company then went on to describe another adverse event in what could only be described as so-clinical-as-to-be-obfuscatory language. Quote below:

“The fourth was a Grade 5 event of suspected fungal pneumonia that occurred on day eight post-ALLO-715 infusion. The suspected fungal pneumonia was diagnosed on the day after cell infusion in this patient with advanced and rapidly progressing disease who had failed multiple lines of therapy. This event occurred in the CA cohort, and it was assessed by the investigator as related to progressive disease and the CA conditioning.”

Translation: The fourth patient died. The patient was pretty sick already when he or she entered the trial. When the patient died, the doctor figured it was probably because of a combination of the patient’s illness, and the chemotherapy conditioning agent. Nobody, nobody, nobody is saying here in black and white ink that our experimental cell therapy might have something to do with sad result.

Come on, guys. I suppose it’s possible that Allogene is correct in this innocuous interpretation of events. It may be true that no one really knows at this point what really happened. But the standard clinical language here serves to confuse people, deflect blame, or perhaps lull people to sleep so they just move on.

This isn’t the kind of communication that builds trust. This industry, like so many parts of our modern world, needs to think harder about how to build trust, not further erode it.