The mRNA vaccines from Pfizer / BioNTech and Moderna have understandably dominated the news, but this past week was Johnson & Johnson’s turn in the spotlight with another important contribution to the COVID-19 vaccination effort.

What happens next is similar to RNA vaccines—the spike protein is made, and the immune cells begin to recognize the new structure and initiate the process of defining anti-SARS-CoV-2 antibodies and T cells to defend against it.

The J&J vaccine has several different immunological characteristics than the RNA vaccines. The neutralizing antibody levels generated by a single dose are not nearly as high as those seen in either the Moderna or Pfizer vaccines. But the T-cell responses in the J&J vaccine, what we call cell-mediated immune responses, appear higher, especially in those we call killer T cells, or the CD8+ cytotoxic T cells, which seek out and destroy cells that are infected with the virus.

These killer T cells are an important part of the story, especially because they tend to both arise earlier and can persist at effective levels with less variation in titer than neutralizing antibodies.

Another important difference in the J&J vaccine trials is that they were designed through an international lens: J&J is a worldwide company with high production capabilities, which eases the burden of distribution. The Ad26 vaccine doesn’t have the cold-chain requirements of the mRNA vaccines and is quite stable at 4 degrees Celsius for extended periods of time.

The Ad26 vaccine platform, importantly, has a long track record and is well-known around the world. It has been used in Africa for preventing Ebola infections, in which the Ebola surface protein is placed into the Ad26 shuttle vector. The Ebola vaccine has been WHO (World Health Organization) authorized for preventing Ebola infections and has been widely administered to women of child-bearing age, pregnant women, and children. The Ad26 platform is also under investigation in elderly adults for RSV (Respiratory Syncytial Virus) infections and in Africa and South America for a preventive HIV vaccine.

The ENSEMBLE Trial was conducted in the United States, Mexico, South Africa and in South America—Argentina, Brazil, Chile, Colombia, Peru. The trial enrolled approximately 44,000 persons, of which 19,302 were in the US; 479 in Mexico; 17,426 in South America; and 6,576 in South Africa. The geographic diversity turned out to be an important feature of the data set, in the context of a pandemic virus with evolving variants becoming prevalent in different parts of the world.

The initial analysis from the J&J trial data provided an extensive look at the vaccine’s effects. More than 400 cases of COVID-19 were reported in the data set: this large data set allowed for a reliable look at the efficacy by country and region without analytical problems posed by too-small sample sizes.

Trial planning was done before the new variants were identified. Hence, it was both fortuitous and extremely lucky that within two months of identifying variants of concern, we “caught” the wave of the introduction of these variants in both Brazil and South Africa. Thus, we now have real-world data on how the B.1.351 variant that has multiple resistant mutations does against a COVID-19 vaccine with the Wuhan-like virus as the immunizing strain.

There is a question about whether the J&J vaccine will be more effective in a two-dose formulation. We don’t know that answer yet. But for a one-dose vaccine, these data are better than I initially expected. To illustrate this, I’ll include the two Kaplan-Meier curves below, which nicely demonstrate the J&J vaccine efficacy on moderate-to-severe disease in South Africa and the disease in severe COVID-19 for the entire study. 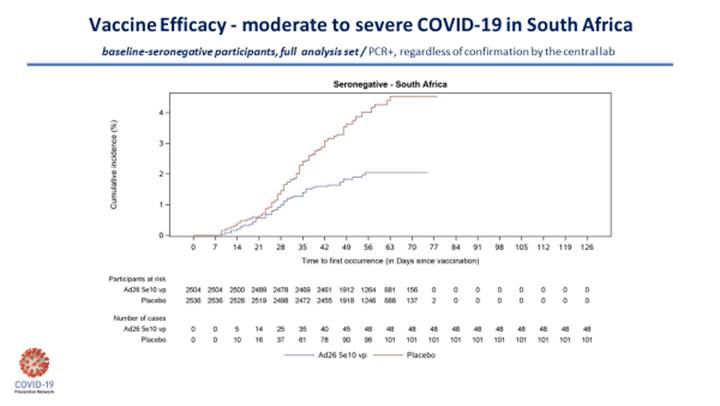 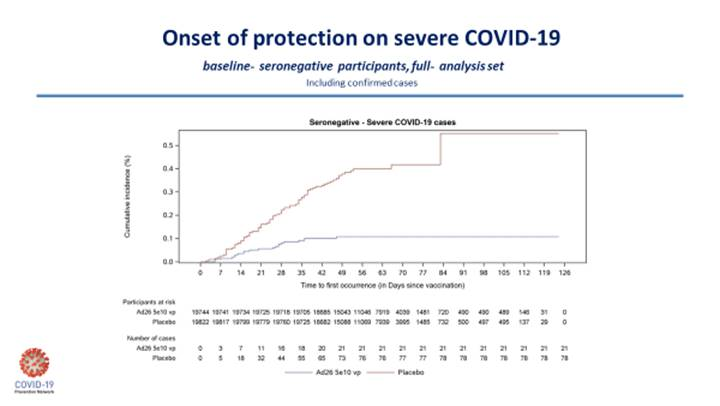 The ENSEMBLE study outlines the complex nature of the human immune response to vaccination and the subsequent outcome.

Let’s come back to the question about what the vaccine’s effect on the immune response, and how that immune response translates into protection against severe disease.

The antibody levels with the one-dose J&J vaccine are much lower than what we see with the mRNA vaccines and yet its effectiveness against preventing severe disease—particularly against the B.1.351 South African variant—is quite similar.

What components of the immune response are central to this protection for severe disease? Antibodies? T cells? Both? These are issues we must decipher, and many of us expect that having high levels of CD8+ T cells activated to recognize the virus is an important part of the reason this adenoviral vaccine provides such excellent prevention against severe disease. It is a nice scientific problem to have, how to go from 85% to 100% efficacy.

The question in front of us today is how do we use this vaccine in our country and globally? To date, it is the only vaccine in which we have good clinical data about both its effects in mild disease as well as severe disease with the South African variant — the cause for recent concern worldwide.

The data from the two mRNA vaccines suggest that they are able to effectively handle the other emerging B.1.1.7 and the California 20.C variants in the US. It is, however, the South African variant that we are concerned about with respect to all the platforms in our current portfolio. As I mentioned earlier, the South African variant is one in which the two-dose AstraZeneca vaccine (chimp adenovirus-based vector) showed no effectiveness in reducing even mild-to-moderate disease in young, healthy South Africans. The point prevalence was 10% with the two-dose AstraZeneca vaccine versus 59% in the one-dose J&J vaccine.

Seeing the disappointing efficacy against the B.1.351 variant that was quickly evolving into the dominant local strain, the South African government—after purchasing and receiving more than a million doses of the AstraZeneca vaccine—made the decision to halt administration of the AstraZeneca vaccine to healthcare workers. Instead, South African authorities opted to work with J&J to obtain its vaccine in an expanded access program. This dynamic interaction between clinical trial data and health care policy is what all these trials have been about. It’s about following the data and adjusting accordingly.

The J&J vaccine is an extremely well-tolerated vaccine—less than 0.5% of enrollees had any grade 3 side effects. It is easy to transport and distribute without the strict cold-chain requirements. There is extensive clinical experience with pregnant women and children. Even though there is somewhat less efficacy with the J&J vaccine in preventing illness—such as a cough, fever, headache, or sore throat—than with the mRNA vaccines, the data from the J&J trial show that the severity of illness is significantly less after vaccination.

This vaccine will keep people out of the hospital, and prevent people from dying. I am gratified to see that both the FDA and CDC ACIP (Advisory Committee on Immunization Practices) advisors endorsed use of this vaccine for those 18 years of age and older. We are pushing J&J to conduct its pediatric trials expeditiously so the advantages of a one-dose vaccine can be used to help get children immunized and back to school by the fall term.

Combating this outbreak requires achieving high vaccine coverage – the percentage of the overall population that’s received a vaccine. The higher that number goes, the greater the chances are that we can stop the spread of new variants.

For all these reasons, the data support the widespread use of this vaccine in our country and around the world.

Dr. Larry Corey is the leader of the COVID-19 Prevention Network (CoVPN ) Operations Center, which was formed by the National Institute of Allergy and Infectious Diseases at the U.S. National Institutes of Health to respond to the global pandemic, and the Chair of the ACTIV COVID-19 Vaccine Clinical Trials Working Group. He is a Professor of Medicine and Virology at University of Washington and a Professor in the Vaccine and Infectious Disease Division and past President and Director of Fred Hutchinson Cancer Research Center.