Here we are heading into Easter Weekend. We’re the wealthiest country in the world, and the undisputed superpower of biomedicine.

Yet we’re still playing a game of catch up against SARS-CoV-2, which apparently our intelligence community knew was emerging around Thanksgiving.

Even after months to get our act together, we still don’t have a coordinated national strategy on exactly how to do the large-scale testing, contact tracing, and the kind of surveillance necessary to allow a reasonably safe return to normal life and economic growth.

The pandemic crosses international boundaries easily, but it could end up hitting the US harder than any other country by most measurements. We currently have the most confirmed cases of any country in the world by far – about 3 in 10 people worldwide with COVID19 are in the US. Latest death count: 16,327, and with about 2,000 more adding up every day at the current rate. The death rate on a per capita basis was less than 20 per million last week. It’s at 50 now.

How are we doing on testing to locate the virus, isolate carriers, and tamp down the community and nationwide spread?

See the dashboard below, which receives data feeds from Johns Hopkins and the World Health Organization. Look especially at the far-right column. On a per capita basis — the number of tests per million residents — the US still lags WAY behind Germany and Italy.

Scott Gottlieb and colleagues at the AEI estimate we need to run 750,000 tests a week. Yesterday, we ran about 43,000. That’s less than halfway where we need to be.

We could be doing so much better. We must get our act together.

Industry can’t do it all alone, because it can’t perform the essential coordination function that only the US federal government can. But industry has a big part to play with rolling out existing diagnostics, and developing technology for tracing, surveillance, treatments and vaccines.

Those of us who can’t directly work on projects can still do a lot. I encourage Timmerman Report readers to go to the new Community Action page on this site, where you’ll see two excellent ways to help. One is by donating your time and money through Life Science Cares, to support the most vulnerable members of our society. Another is by giving to Fred Hutch, to support science. Fred Hutch is best known for cancer research, but it’s strength in infectious disease has been building for decades, and it is evident for all to see today. Trevor Bedford and colleagues blazed a trail with the NextStrain.org resource for sharing viral genomes, and it’s been immensely useful in the fight.

Go to the TR Community Action page to learn more, and see how you can give to Life Science Cares and Fred Hutch’s world-leading COVID19 research.

Now, please review the big events of the week in biotech via Frontpoints.

Science From Around the Web

When to Reopen America?

Quote of the Week

“It’s very feasible we’re going to see multiple city- or state-level outbreaks across the country in the next few weeks and months,” said Maia Majumder, a computational epidemiologist at Boston Children’s Hospital. “They will start at different times and they will peak at different times.” – Apr. 1, STAT article by Andrew Joseph.

Britt Glaunsinger, a molecular virologist at UC Berkeley, delivers an excellent one-hour lecture on the basics of SARS-CoV-2 virus. Includes its origins, how it gets into cell, replicates, and causes immune havoc.

Who do you approve or disapprove of during this coronavirus crisis – corporations in general, the drug companies, the media?

See these results from CNBC poll. 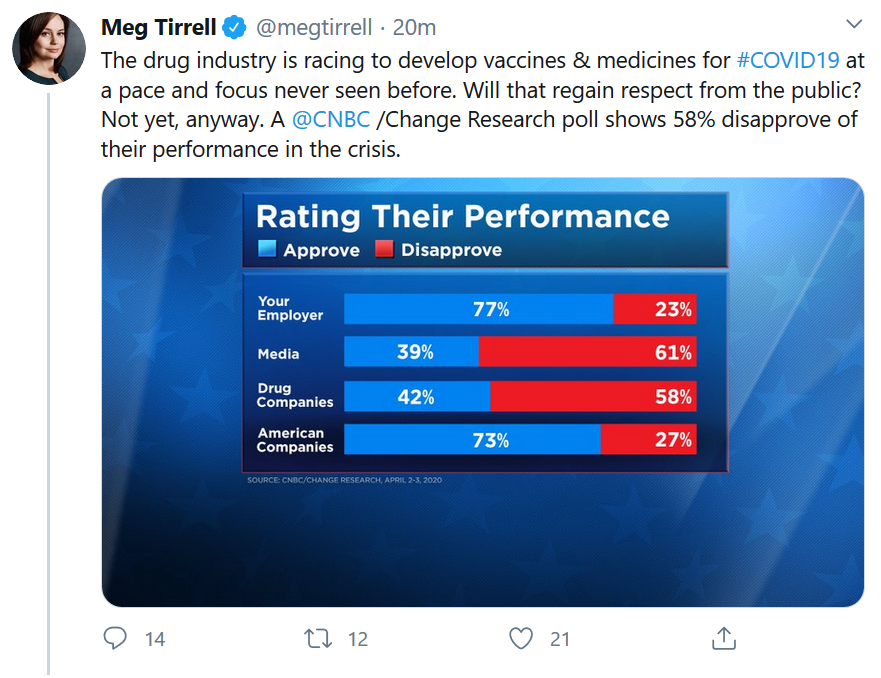 Meg is a friend and respected colleague, but these kind of polling questions annoy me for multiple reasons.

For starters, not everyone in “pharma” is the same. There’s Hal Barron and a bunch of people I could name on one end, and there’s Daraprim price-gouger on the other end. There’s a lot of in between.

Same thing in “the media.” It’s not a monolith.

Partly for this reason, I don’t like the term “the media.” It’s too vague to have any meaning at this point. “The media” should be more precisely defined to create a distinction between professional journalists and info-tainers with large audiences (Rush, Hannity) or popular TV entertainers (Stephen Colbert, Trevor Noah).

When you look at actual journalists at responsible outlets, the media has performed extraordinarily well in this pandemic. Often, serious reporting and analysis is occurring under the extraordinary pressure of an advertising collapse. Even so, according to a CNBC poll, “the media” appears to have been effectively demonized.

While We’re At it, Who Exactly is ‘The Media’?

Does this guy with an opinion, and 565,000 followers, cited below count as “the media”?

God bless @andybiotech for stepping up to the plate to debate this guy, but in an all-out propaganda war, he who commands the most trolls wins the day, not he who makes the most persuasive argument rooted in facts. 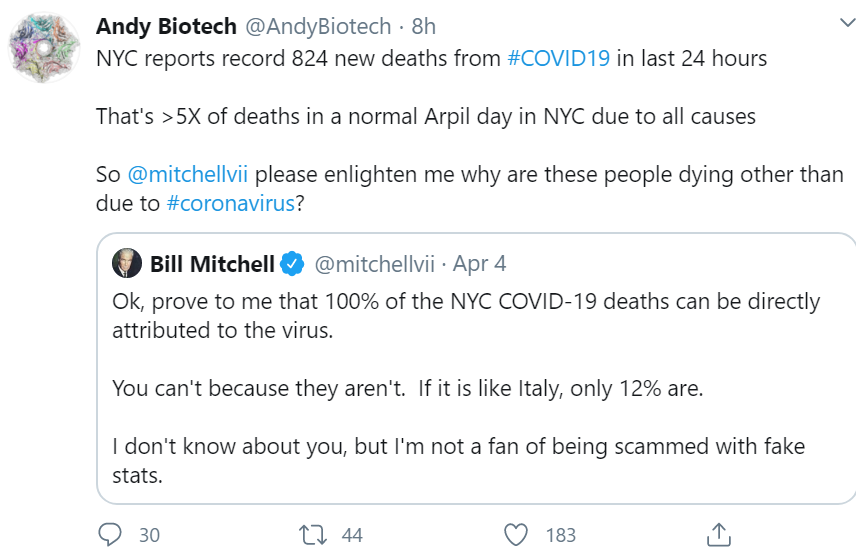 GSK and VIR Biotechnology agreed to work together on antibodies for treatment against SARS-CoV-2 and other coronaviruses. The plan is to take VIR’s antibody discovery capabilities, and leverage them further with GSK’s functional genomics and CRISPR screening assets. GSK agreed to make a $250 million equity investment in San Francisco-based VIR, buying shares at a 10 percent premium. VIR has identified a couple of antibody candidates that appear to be good at neutralizing the virus in cellular assays in the lab. The companies hope to start Phase II studies in three to five months.

Pfizer and BioNTech provided further details on their mRNA vaccine collaboration against COVID-19. Germany-based BioNTech will pocket $185 million upfront (mostly via equity). If the vaccine is found safe and effective, there’s potential to scale up to “millions” of doses by the end of 2020, the companies said. Initial trials will be conducted in the US and Europe, starting this month, April 2020. If the vaccine truly works, the companies say they could scale up to meet demand with “hundreds of millions” of doses of the mRNA vaccine in 2021. The companies said they have “multiple” vaccine candidates to evaluate, meaning it hasn’t selected a single lead candidate to put all possible corporate firepower behind.

Waltham, Mass.-based Arrakis Therapeutics pocketed a $190 million upfront cash payment from Roche. The big company will now gain access to Arrakis’ platform, which adapts drug discovery tools to predict structures on RNA that are amenable to intervention with small molecule drugs. The new partnership provides Roche with access to a broad set of RNA targets “across all of Roche’s R&D areas.” (See TR coverage from the Arrakis early days, Feb. 2017)

South San Francisco-based Second Genome secured a $38 million upfront payment from Gilead Sciences. The companies will now work together to look for useful biomarkers for as many as five Gilead pipeline programs for inflammation, fibrosis and other diseases.

A pair of RNA interference companies that have clashed in the past, Alnylam Pharmaceuticals and Dicerna Pharmaceuticals, are now working together. Dicerna will lead a development program for siRNA drug candidates from each company against alpha-1 liver disease. At the end  of Phase III, Alnylam can opt-in to co-commercialize. The companies also agreed to cross-license some intellectual property, on a non-exclusive basis, for the treatment of primary hyperoxaluria. In a statement, the companies said the deal “puts the needs of patients and the patient community first,” presumably by directing more time and energy to drug development, and less toward IP litigation.

Ann Arbor, Mich.-based Millendo Therapeutics said its Phase 2b study of its most advanced asset in development, livoletide, failed to meet its primary endpoint in the treatment of Prader-Willi Syndrome. This was a randomized, placebo-controlled study looking at hyperphagia (overeating) and food-related behaviors. Millendo said it’s shutting down the livoletide program, and shifting its resources to work on a couple of other pipeline programs.

Cambridge, Mass.-based Sage Therapeutics cut the jobs of 340 employees — 53 percent of its workforce. Most of the cuts are coming in the commercial group that’s been marketing brexanalone (Zulresso), a first-of-its-kind treatment for postpartum depression. The company said it will continue to supply existing prescribing sites, but no longer actively focus on new geographies. The company said the cuts will save $170 million a year, and it has $1 billion in cash left in the bank to invest in development programs for depression, neurology, and neuropsychiatry.

Lexington, Mass.-based Keros Therapeutics raised $96 million in an IPO of 6 million shares priced at $16 apiece. The company is working on treatments for hematological and musculoskeletal disorders. Few people noticed, but the stock traded up in its first two days, closing at $21.57 yesterday.

New York and San Diego-based Zentalis Pharma raised $190 million in an IPO of 10.6 million shares priced at $18. It’s a developer of small molecule drugs for cancer. It traded up steadily as well, ending its fifth day on the NASDAQ at $24.31.

The FDA cleared luspatercept-aamt (Reblozyl) for the added indication of myelodysplastic syndrome (MDS). It’s from Bristol-Myers Squibb and Acceleron Pharma. The drug was previously approved for treating anemia in beta-thalassemia patients.

Pfizer got the FDA green light to market encorafenib (Braftovi), with cetuximab for patients with metastatic colorectal cancer that have BRAFv600E mutations.