When Donald Trump first considered a run for president in 2000, he never rose above 1 percent in the polls.

America changed in the early years of the 21st century.

Trump was always good at harnessing tabloid media weaknesses to his advantage. When our information commons shifted to a 24/7 advertising-based attention-grab economy on the Internet and TV, he was uniquely positioned to seize the moment.

Through feeding the beast with an endless stream of outrage and conflict and provocation and distracting infotainment, he put himself in a position to drive cultural and political conversation in America. By dominating the attention economy, he ended up winning the Presidency in November 2016.

This is a test.

We have a chance to correct this mistake by voting in overwhelming numbers this fall.

If we fail this test, we can expect long-term erosion of US leadership in biopharma. Driving away legal immigrants, 25 percent proposed budget cuts to the NIH, and crude drug price controls are just a few of the anti-biotech policies that this Administration and its enablers supported in office.

Entrepreneurs around the world see an opportunity to poach US biotech talent. See the increasingly bold appeals by ex-US companies, like the one below.

I appreciate our friends in Canada and around the world. But this is up to us in America to chart a different course. 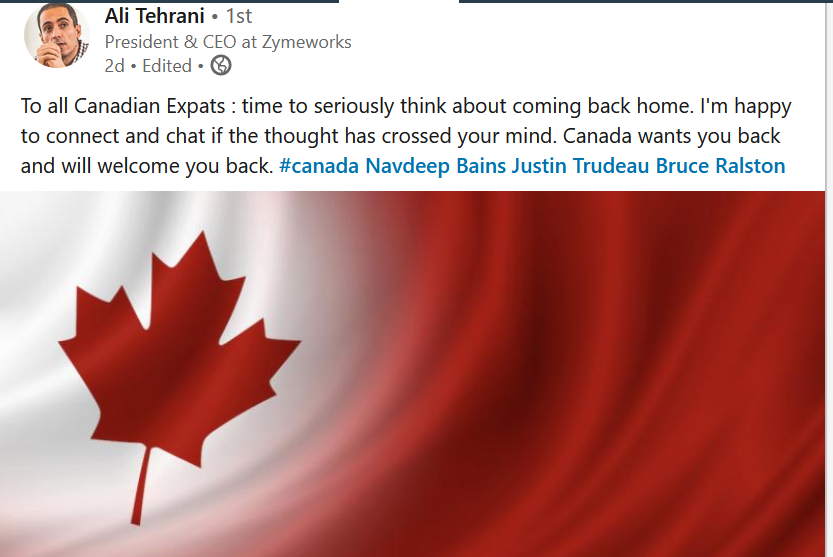 When our information commons is algorithmically transmogrified into a psychological warfare battle zone – not a marketplace for ideas – then it stands to follow that you can’t have a reasoned debate over serious topics like what the price ought to be for a COVID-19 vaccine.

The infodemic, and our nation’s resulting dalliance with a cynical entertainer-in-chief, is the main reason why the US has failed – and continues to fail — to respond properly to the COVID-19 challenge. 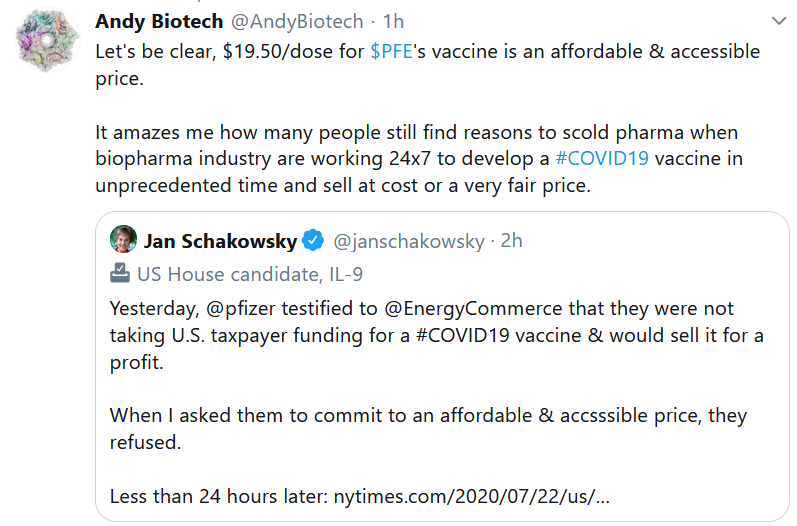 Boston-based Longwood Fund closed its fifth fund with $170 million to put to work into biotech companies, largely around company creation.

Burlingame, Calif.-based ALX Oncology raised $185.7 million in an IPO at $19 a share. The company is working on drugs that block the CD47 checkpoint pathway.

Watertown, Mass.-based Pandion Therapeutics, a developer of treatments for autoimmune diseases, raised $135 million in an IPO at $18 a share. (See TR coverage of the company’s Series A financing, January 2018).

London and Raleigh, NC-based Verona Pharma, the developer of treatments for respiratory diseases, raised $200 million in a private placement.

Columbus, Ohio-based Forge Biologics raised $40 million in a Series A financing led by Perceptive Xontogeny Venture Fund. The company is seeking to manufacture viral vector gene therapies for other companies on contract, and to develop its own novel therapies.

Boston-based Cerevance, a company working on brain diseases, tacked on an additional $20 million to close its Series B financing at $65 million.

San Francisco-based Olema Oncology raised $54 million in a Series B financing to advance its work against breast cancer.

Germany-based BioNTech, the mRNA vaccine and therapeutics company working on a COVID-19 vaccine in partnership with Pfizer, raised $511.5 million in a stock offering at $93 a share.

Kiniksa Pharmaceuticals raised $155 million in a stock offering. It says it’s based in Bermuda, which we all know is a place where companies go so they can pay their fair share of taxes to support the education and research that makes for a thriving biotech hub.

New Haven, Conn.-based BioXcel Therapeutics passed a pair of Phase III clinical trials with its sublingual film formulation of dexmedetomidine. The first study was in schizophrenia patients, and the second was for bipolar disorder. The drug appeared to work fast (within two hours), it worked at both a low and high dose, and had a clean safety profile.

San Diego-based Amplyx Pharmaceuticals said in a topline press release that it passed a Phase II clinical trial of a first-line treatment for invasive fungal infections with Candida.

Cambridge, Mass.-based EQRx in-licensed a CDK4/6 inhibitor from G1 Therapeutics, to develop a low-cost challenger in that therapeutic category of cancer treatment.

France-based Genfit said it will stop investing further in its lead drug candidate for NASH, and will release a new corporate strategy by the end of September.