Science is poised for a comeback in the public mind.

Most can agree that science, after years of getting beaten up, is leading us out of the crisis. It’s a source of national competitive advantage. This creates an opportunity to double down on investments, to test new ways of working, to shake some things up that need shaking.

I’m happy to discuss ideas for US science policy with freshman Congressman Jake Auchincloss. I’ll interview him for the first half-hour, followed by another half-hour of audience Q&A. 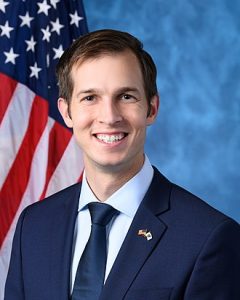 Rep. Auchincloss is a Democrat from the Fourth District of Massachusetts. The district extends from the Boston suburbs of Brookline and Newton to the blue-collar industrial towns that stretch to Rhode Island.

He’s an ex-Marine who commanded infantry in Afghanistan and special operations in Panama. Before being elected to Congress in November, he served on the Newton City Council.

Science runs in the family – his father, Hugh Auchincloss, is the principal deputy director to Tony Fauci at the National Institute of Allergy and Infectious Diseases. His mother is Laurie Glimcher, CEO of the Dana-Farber Cancer Institute.

Rep. Auchincloss strikes me as well-schooled on the issues and eager to learn more about biotech. He’s potentially well-positioned as a young and energetic new member of Congress who doesn’t carry some of the baggage of past partisan fights. He identifies as an “Obama-Baker” voter. He’s thinking about bipartisan issues like NIH funding, and ways to invest in young people for bio-manufacturing jobs.

If you are new to Clubhouse, it’s audio-only, invitation-only, and iPhone-only at this point. It appears to be engineered in a way that elevates substantive conversations. It’s sometimes fun. It can be spontaneous, like old-school call-in radio. I’m looking forward to trying out a forum here with Congressman Auchincloss.

For those on Clubhouse already, follow Jake Auchincloss to save this session on your calendar. If you are an active TR subscriber and would like an invitation to join, ask me luke@timmermanreport.com