Summiting the highest peak in the world and raising $340,000 for cancer research at Fred Hutch was the start.

It was the start of something bigger.

Today, I’m overjoyed to say that an outstanding team of biotech executives and investors will join me on the Kilimanjaro Climb to Fight Cancer. This will be a 7-day expedition to the summit of Kilimanjaro, the highest peak in Africa, in late July.

Like Everest, this climb will be a big fundraiser for cancer research at Fred Hutch, a leading center for immunotherapy.

Unlike Everest, the pinnacle of Kili can be reached without supplemental oxygen tanks and fancy technical gear. At 19,340 feet, Kili is within reach for anyone in good physical shape, a willingness to train for a few months, and a desire to support this great cause.

So far, 16 climbers are confirmed. They are leveraging their networks to raise $50,000 apiece.

Bob More. Bob is a veteran biotech venture capitalist, now serving as a partner with Alta Partners and as an advisor to the Bill & Melinda Gates Foundation. He’s a skier, and two-time climber of Kilimanjaro. Bob is functioning as campaign co-chair, providing me with valuable support and advice. (Donate to Bob’s Climb to Fight Cancer campaign.)

Garry Menzel, CEO, Cambridge, Mass.-based TCR2 Therapeutics. Garry is not only running an aspiring leader in the field of engineered T-cell receptor therapies for cancer, he’s an accomplished mountaineer. Notable ascent: Manaslu in Nepal. It’s the eighth-highest mountain in the world. (Donate to Garry’s Climb to Fight Cancer campaign.)

Praveen Tipirneni, CEO, Waltham, Mass.-based Morphic Therapeutic. Praveen is running a company that has used a combination of proprietary crystallography images, high-powered computational simulations, and small-molecule chemistry to sprint ahead with new drug candidates against integrin targets. This fall, AbbVie wrote a $100 million upfront check help advance this work. Praveen also happens to be a runner. We once shared a van ride on the 24-hour road race called “Reach the Beach” in New Hampshire. Apparently, that sweaty van ride didn’t dissuade him from accepting this invitation. (Donate to Praveen’s Climb to Fight Cancer campaign).

Kelly O’Brien, vice president of philanthropy, Seattle-based Fred Hutch. Kelly O’Brien was the key decision-maker at Fred Hutch who bet on the Everest campaign before success was assured – both on the mountain, and in the fundraising department. Kelly is also an experienced climber. She has summited Kilimanjaro, and trekked to Everest Base Camp, elevation 17,500. (Donate to Kelly’s Climb to Fight Cancer campaign).

Kristin Anderson, Kristin is a postdoc in Phil Greenberg’s lab at Fred Hutch. The lab boss is a co-founder of Juno Therapeutics, and a world leader in CAR-T and TCR cell therapy. Anderson is a cancer survivor (triple-negative breast cancer diagnosis at age 28), and she’s also a rising scientific star. This fall, she won a Presidential Award winner for young investigators from the Society for Immunotherapy of Cancer (SITC). She says she enjoys hiking in the Cascades, but doesn’t get out as much as she’d like. Wonder why? (Donate to Kristin’s Climb to Fight Cancer campaign).

Bill Newell, CEO, South San Francisco-based Sutro Biopharma. Bill’s company is developing antibody-drug conjugates for cancer. The key twist is that Sutro makes its large molecules in a cell-free platform, aiming to sidestep the cost and complexity of classical biologics manufacturing in eukaryotic cell lines. Sutro has a number of well-known partners, and was a member of the Biotech IPO class of 2018. (Donate to Bill’s Climb to Fight Cancer campaign).

Lesley Stolz, head, JLABS Bay Area. Lesley is a veteran of biotech business development. For those unfamiliar, JLABS is part of Johnson & Johnson. JLABS sets up quality lab space for entrepreneurs to help them hit the ground running with experiments that are essential for little companies to grow up and win the next round of funding from venture capitalists. (Donate to Lesley’s Climb to Fight Cancer campaign).

Simba Gill, CEO, Evelo Biosciences; venture partner, Flagship Pioneering. Evelo is based on new insights into the interactions of the microbiome and the immune system in the tumor microenvironment. Evelo is a member of the Biotech IPO Class of 2018. Born in Tanzania, Simba’s mother summited Kilimanjaro when she was pregnant with him. Dang. (Donate to Simba’s Climb to Fight Cancer campaign).

Heidi Hagen, co-founder, chief strategy officer, Vineti. Heidi is working to build a venture-backed software company to help cell and gene therapy companies manage specialized supply chains. She gained a wealth of experience in this tricky area at Dendreon. Heidi, in a past life, was twice named to the All-Pac10 team as a middle-distance runner at the University of Washington. (Donate to Heidi’s Climb to Fight Cancer campaign).

Uciane Scarlett, associate, Atlas Venture. Before joining Atlas in 2018, Uciane (pronounced “You-sha-knee”) was a director of business development and strategy at Compass Therapeutics. Compass is a private company working on treatments for autoimmunity and cancer. Uciane got her PhD in cancer immunology from Dartmouth College. (Donate to Uciane’s Climb to Fight Cancer campaign).

Sandy Zweifach, founder and CEO, South San Francisco-based Nuvelution Pharma. Sandy has a diverse set of experiences in business development, investment banking and venture capital over the past 25 years. Nuvelution, backed by Clarus Ventures and Novo A/S, seeks to increase R&D output through risk-sharing collaborations. As a climber, he attempted Pico de Orizaba, one of the famous Mexican volcanoes, years ago. (Donate to Sandy’s Climb to Fight Cancer campaign).

Nancy Miller-Rich, CEO, Miller-Rich Associates. Before starting her own consulting firm in September 2017, Nancy was a senior vice president at Merck. She oversaw global human health business development and licensing, strategy and commercial operations. That gave her direct profit-and-loss involvement in a $38 billion business. At Merck, she closed 300 deals, involving $10 billion in value creation. Nancy has also dreamed of climbing Kilimanjaro for years. (Donate to Nancy’s Climb to Fight Cancer campaign).

Kirsten Axelsen, vice president for strategy and new business assessment, Pfizer Innovative Health. Kirsten leads the team that crafts strategy for the Pfizer Innovative Health business, and the company’s patient-focused vision. Through nearly two decades at Pfizer, Axelsen has made her name as someone “uniquely savvy about the complex commercial and political landscape into which today’s drugs are developed and launched,” said Nina Kjellson, a general partner with Canaan Partners. Kjellson adds that Axelsen is a mother to twins, a marathon runner and “all-around bad-ass.” (Donate to Kirsten’s Climb to Fight Cancer campaign).

Nina Kjellson, general partner, Canaan Partners. Nina is one of the most respected biotech VCs in the business. One of her current portfolio companies is Vineti, (see above) the software company striving to advance the cell and gene therapy revolution. (Donate to Nina’s Climb to Fight Cancer campaign).

Want to join this private group on the highest peak in Africa, July 17-28?

This campaign is shaping up into something special. Simple math says that 20 climbers each raising $50,000 adds up to $1 million.

We are well on our way to that goal with 16 climbers. At least a dozen more are considering joining. Our group limit is 28.

Together, we will raise a ton of cash and awareness for this exciting moment in cancer research.

Want to join the Kilimanjaro team?

Thank you for everything you do in the fight against cancer. 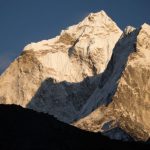 A Trek in the Himalayas for Cancer Research 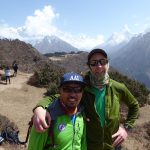 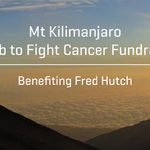