Last year, at about this time, I shared my experience losing 80 pounds.

I achieved this goal through a low-carb diet and coaching, guided by the Virta program, along with regular exercise.

The overarching concern I expressed in that article, one year ago, was my recognition of how fragile weight loss can be. Most people who lose significant weight soon gain it right back, often putting on even more than they took off.  As a seasoned yo-yo dieter, prior to adopting my recent lifestyle changes, I was acutely aware of this threat, and terrified, if not consumed, by this possibility.

First, the good news: in 2019, I successfully kept the weight off. If anything, I may have lost a few more pounds over the course of the year. That’s worth celebrating. 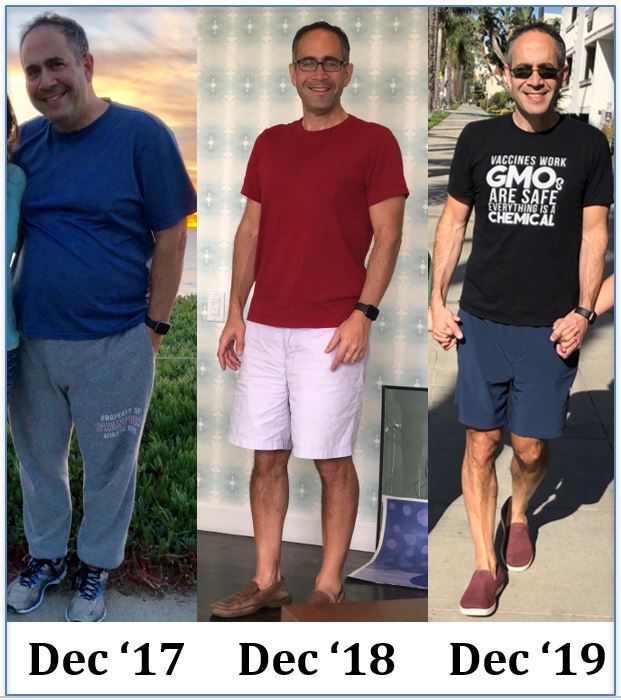 Now, the less good news: achieving this weight maintenance was a constant struggle. It felt like a battle every single day. In the back of my mind, I hoped, and perhaps presumed, that as I adjusted to life at a lower, healthier Body Mass Index (BMI), I would achieve a new, stable, happy equilibrium. The dream was that my new lifestyle would result in a kind of autopilot, where I wouldn’t need to think much about eating properly. Rather, it would just happen – it would be the new normal.

To be sure, a lot has become normal: I’ve not had pasta, pizza, cookies, pastries, bagels, cake, or candy in about two years. What I’ve found is that since these are hard exclusions (absolute contraindications, you might say), I’m not especially bothered by them. There isn’t a choice to consider about whether to eat these things, ever.

Far more challenging, it turns out, is the food you can have, but in moderation – nuts and cheese, for example. A few nuts are ok for a snack, but without thinking, a few becomes a few more, and all of a sudden you’re backtracking; such small but progressive indiscretions seem to be the most difficult challenge. Plus there’s the constant attention to portion size.  The maximum recommended size for a steak, for example, is 6 oz – 3/8 of a pound (and keep in mind, the recommended amount of protein-containing food per meal is around 3-6oz, so 3/8 lb is truly the upper end). Steak is delicious, and mustering the discipline to eat what can feel like a constrained portion, every single day, is an abiding challenge.

Over the past year, I have continued to check both my blood ketones and weight every day (tracking both via the Virta app). I try not to get frustrated by the noise in the data.  When I first started eating carefully, my ketone levels were relatively high (squarely in the middle of the target range for nutritional ketosis) and my weight loss was rapid, but after about six months, while keeping to the same basic diet, my ketones were significantly lower (though generally still within the target range). Weight loss plateaued at a reasonable BMI, albeit stubbornly a few pounds above my intended goal.

In some ways, it felt like I was on one of those ships in sci-fi movies that finds all its navigation equipment failing as it nears a black hole. There was a time when I could easily appreciate the correlation between careful eating and solidly elevated ketones, and weight loss. When the connection became less clear, I felt confused and adrift. Even with careful eating, my ketones seemed generally less responsive – and highly variable – and my weight seemed to fluctuate as much as a pound or two up or down daily, often with little apparent correlation with anything I ate or did. Even though I rationally knew such fluctuation was likely random noise, I remained concerned every time I saw an uptick that it might be the beginning of a yo-yo cycle, and was motivated to eat even more carefully, much as a random fluctuation down sometimes led me to let down my guard for a bit, which I would later regret. 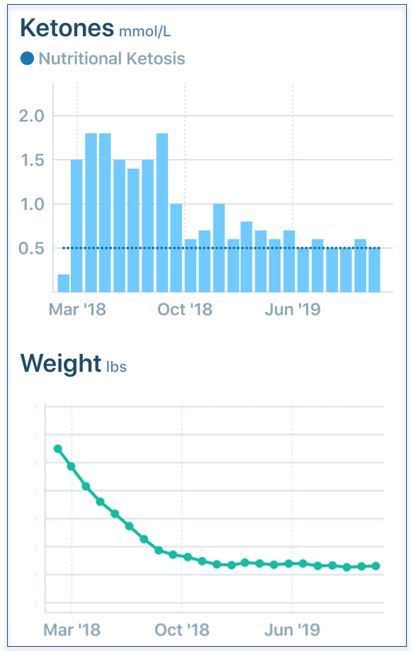 I found it quite frustrating (if not surprising) that the same general approach to eating that had initially seemed to result in significant weight loss, in half a year, stopped resulting in any meaningful weight loss – even though I was still working really hard to continue the healthy eating. Like Lewis Carroll’s Red Queen, it seemed like I needed to run fast just to stay in the same spot. The lack of consistent correlation between daily activities (eating, exercise) and measured ketones and weight the following day was also (and remains) utterly maddening. While the coaching provided by Virta seemed helpful during my initial weight loss phase, it seemed less helpful after that – not for lack of availability, or interest, but rather, because I think it’s harder to know what to say. To their credit, I found that the coaches tended to be extremely honest, acknowledging the challenges of this phase; my sense was that finding a way to keep on keeping on, after the rapid weight loss phase is over, is something that represents an ongoing struggle for even the most successful participants, including many of the coaches.

The consequences of all this disciplined eating have been a mixed bag. On the one hand, I’ve really enjoyed and appreciated the results of this lifestyle – showing up for meetings feeling fit rather than fat, and ordering clothes online relatively confident they’ll actually fit and look ok. On the other hand, in addition to the continued focus and mental discipline that’s unrelentingly required, there are other effects as well. Meals, predictably, are much less enjoyable – it’s fun to chow down with family, friends, or colleagues – especially around special occasions. When you’re eating in a hyper-disciplined fashion, meals are intrinsically much less fun – to say nothing of watching football without pizza, beer, or nachos.

During the last year, I’ve continued to exercise regularly (my choice, not a core aspect of Virta program by the way), and by regularly I really mean just about every single day – I’m not sure I skipped one day in the last year, and if so, it wasn’t very many. I’ve continued to do about 45 minutes of elliptical each day, and some weights every other day, as well as a two-minute plank each day (inspired by AliveCor founder Dr. Dave Albert). While “burning calories through exercise is a pretty inefficient process,” as the hosts of Freakonomics recently put it, I’ve embraced the daily routine, perhaps as much for its centering effect as anything else; I’m at the gym when it opens at 5am, and it’s terrific at 6am to feel that I’ve already done something positive for the day. Plus, since (as readers of this column know) I use the opportunity to listen to podcasts or audiobooks, it generally feels like a twofer, starting the day by doing something for my mind and my body. As I wrote last year, there are data pointing to the strong influence of personal social networks on obesity and fitness, and this year, I again found myself influenced by colleagues dedicated to daily exercise, including Andy Plump (head of R&D at Takeda), Tachi Yamada (former head of R&D at Takeda, former head of the Gates Foundation, and currently a venture partner at Frazier), and Mike Joyner, a physician and physiologist at the Mayo Clinic, and a twitter buddy (@DrMJoyner) before I quit engaging with the platform. Joyner was also a featured researcher in the Freakonomics podcast cited above.

My two years of reflective consumption have delivered improved fitness but not psychological ease or comfort – and in this I suspect there is an important lesson, which relates not only to weight loss and diet, but also to illusions of success in most any domain. And the key visual for this is what I’ll call the “Stanford Duck,” a phenotype introduced to me by a Stanford grad as I was preparing to interview him for a Tech Tonics podcast episode.

Stanford students strive for academic excellence, of course, but apparently they are equally guided by a concept promulgated during the Renaissance called sprezzatura – effortless grace. The idea is that not only do you want to succeed brilliantly in whatever you do, but you don’t want to appear that you’re even trying; your performance is to be seen an as expression of your exceptional natural talent and ability.  The catch is that to achieve, and maintain, this success, you need to work incredibly hard. Hence the analogy of the duck: above the water, calm and placid, but below, paddling like mad. It is also not unique to Stanford.

In so many domains, there’s a seductive idea of professional success, where it’s situated geographically, a place, difficult to get to but once you’re there, you’ve “made it.” What has struck me about so many successful people I know is how incredibly hard they continue to work, every single day, to remain where they are, and hopefully accomplish still more; without this drive to continuously strive, professional success may be short-lived, a superstar may lose relevance with surprising speed, a process that, a la Twain, may be imperceptible (as well as inconceivable) at first, but then occurs with cruel rapidity. The most enduringly successful entrepreneurs, academics, investors, and corporate leaders I know are characterized far more by fear than complacency, operating as if they are just starting to climb the career ladder, rather than sitting on top of it. They constantly press, constantly think about what’s next for their scholarship, their business, their art.

Dieting is much like this. You need constant vigilance and positive daily habits, both to get to a good place and, especially, to stay there.

I suspect the idea of success as a comfortable destination may represent a necessary delusion, the sort of thing that initially emboldens you to begin to move in the right direction. Perhaps by the time you realize that success is less stable and more dynamic than you originally assumed, you’re sufficiently caught up in the flow of it all, and sufficiently allured by the taste of success that you can’t let it go.