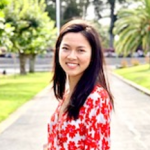 The biopharma industry was pressured to get faster and more innovative to respond to the urgent global health challenge of the past year.

Asian-American executives have played a key role in leading this charge, although they often aren’t in front of the cameras and microphones.

As part of Asian American and Pacific Islander Heritage Month, we wanted to stop and think about who some of the AAPI leaders are in our sector, and honor their contributions. They inspire us. 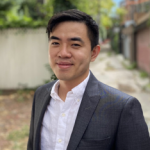 How did we arrive at our list of high-impact executive leaders? Our selection criteria were as follows: commitment to solving critical health problems, a track record of leading high-integrity and scientifically innovative organizations, and dedication to patients and the next generation of innovators.

As biopharma companies continue to improve in hiring leaders and employees representative of the patient populations they serve, we look forward to seeing this list grow in breadth and depth. 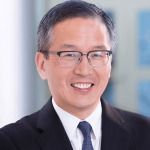 David is perhaps best known for his work at Kite Pharma, where he was the head of R&D and chief medical officer who oversaw the team that developed one of the first two chimeric antigen receptor-modified T-cell therapies (CAR-T) for cancer. That personalized cancer immunotherapy, Yescarta, was a historic milestone for the field, developed around the same time as Novartis’ Kymriah.

Prior to Kite, David held senior leadership roles at Amgen, where he played key roles in development of Vectibix, Blincyto and Imlygic. Before entering the biopharma industry, David was Associate Professor of Microbiology, Immunology and Molecular Genetics at the David Geffen School of Medicine at UCLA.

Pearl S. Huang, Ph.D. joined Cambridge, Mass.-based Cygnal Therapeutics in January 2019 as President and CEO. She is also a Venture Partner at Flagship Pioneering and a member of the boards of Cygnal, KSQ Therapeutics, and Waters Corporation. 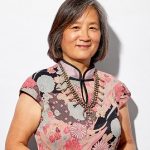 Prior to Cygnal, Pearl served as Senior Vice President and Global Head of Therapeutic Modalities at Roche where she oversaw the discovery of biologics, small molecule, and nucleic acid-based therapies.

Prior to Roche, Pearl was the co-founder and Chief Scientific Officer of BeiGene, and before that, she was the Vice President, Oncology Integrator of Discovery and Early Development at Merck where she led 14 early development teams and conducted seven first-in-human trials in one year. Before joining Merck, Pearl led oncology discovery at GSK where she initiated the programs that delivered trametinib and dabrafenib to patients.

Pearl received her undergraduate degree in life sciences from MIT and a Ph.D. in molecular biology from Princeton University. (Listen to Pearl describe her career arc, and her recent work on cancer drugs based on new learnings about the peripheral nervous system, on The Long Run podcast).

Angela Hwang is a member of Pfizer’s Executive Team and Group President of the Pfizer Biopharmaceuticals Group, which comprises the entire commercial organization of Pfizer. Her organization of 26,000 colleagues across 125 countries is responsible for bringing over 600 innovative medicines and products to patients. 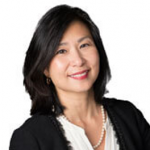 Angela is a member of the Board of Directors of UPS, the global leader in supply chain logistics and package delivery, EFPIA (European Federation of Pharmaceutical Industries and Associations), as well as the Pfizer Foundation, a charitable organization that addresses global health challenges. She has also been active in industry groups such as BIO, where she previously co-chaired the Vaccines Policy Committee.

In 2019, Angela launched Diverse Perspectives, a podcast series where she hosts global thought leaders pioneering change across a variety of industries.

Angela received her Bachelor of Science in Microbiology and Biochemistry from the University of Cape Town and M.B.A. from Cornell University. She is a wife and proud mom to a teenage son and daughter, and a strong advocate for women’s leadership and sustainable global health equity. 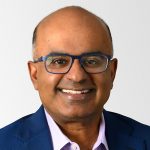 Sek has dedicated his career to researching the genetic mechanisms underlying cardiovascular disease and using these insights to improve preventive cardiac care. Prior to co-founding Verve, Sek served as director of the Massachusetts General Hospital (MGH) Center for Genomic Medicine and was the Ofer and Shelly Nemirovsky MGH Research Scholar. He also served as director of the Cardiovascular Disease Initiative at the Broad Institute and was professor of medicine at Harvard Medical School.

Sek led the team at Verve that demonstrated CRISPR base editing could be used to edit PCSK9, and substantially and durably bring down LDL cholesterol in non-human primates with a single infusion. That pioneering work was published last week in Nature.

For more on Sek’s life story, and the concept behind CRISPR base editing for cardiovascular disease, listen to this episode of The Long Run podcast.

Reshma Kewalramani, M.D., is the CEO at Vertex and the first female CEO of a large US biotechnology company. 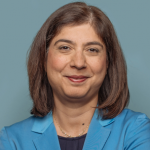 Reshma is passionate about developing and supporting the next generation of scientists and giving back to her community. She is a member of the board of directors of the Biomedical Science Careers Program, and RIZE Massachusetts.

Reshma completed her medical training in Internal Medicine and Nephrology at the Massachusetts General Hospital and is a graduate of the Boston University School of Medicine and Harvard Business School.

Samarth Kulkarni, Ph.D., has been the CEO of Switzerland and Cambridge, Mass.-based CRISPR Therapeutics since 2017. 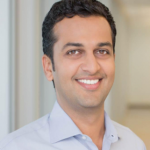 Sam oversaw the strategic collaboration of CRISPR with Vertex Pharmaceuticals to develop gene-edited therapies for hemoglobinopathies. This collaboration recently culminated in data released at the American Society of Hematology 2020 meeting, where 10 patients with sickle cell or transfusion-dependent beta thalassemia were effectively cured after a one-time treatment with CTX001. See the paper describing that achievement in the New England Journal of Medicine.

Sam also oversaw strategic collaborations with ViaCyte to develop regenerative medicines for diabetes, with Nkarta Therapeutics to develop gene-edited cell therapies for cancer and the formation of Casebia Therapeutics, a joint subsidiary formed by CRISPR and Bayer.

Prior to CRISPR, Sam spent a decade at McKinsey & Company, where as a Partner, he co-led the biotech practice, focusing on strategy and operations and leading initiatives in areas such as personalized medicine and immunotherapy.

Sam received a Ph.D. in Bioengineering and Nanotechnology from the University of Washington and a B.Tech. from the Indian Institute of Technology.

Neil Kumar, Ph.D. is a co-founder and CEO of BridgeBio, a biotechnology company focused on developing medicines for rare genetic diseases. 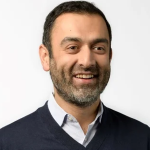 At BridgeBio, Neil built a hub and spoke model of company structure, with BridgeBio as the umbrella company with an $8.8 billion market valuation driven by a network of subsidiaries that includes Eidos Therapeutics, QED Therapeutics and Navire Pharmaceuticals.

Neil is passionate about building an organization that is patient-first. The cornerstone of the BridgeBio mission is commitment to patients and their families.

Dean Li, M.D., Ph.D., took over one of the biggest biopharma industry R&D jobs on Jan. 1, 2021 when he became Executive Vice President and President of Merck Research Laboratories. 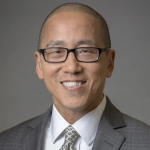 From this position, Dean leads the company’s worldwide human vaccines and therapeutics R&D organization. In just a few months, Dean has already overseen several transformative deals at Merck including the acquisition of Pandion Therapeutics and collaboration agreements with Artiva Biotherapeutics and Amathus Therapeutics. (See TR insider coverage of the Pandion/Merck deal by Vikas Goyal).

Dean mentored the next generation of physician-scientists through his roles as the primary investigator of the University’s Cardiovascular Research Training Program and as Director for the School of Medicine’s M.D./Ph.D. programs. 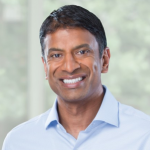 He has overseen the licensing of over 30 novel medicines, including cell and gene therapies and vaccines. He is a champion of access and global health priorities, including through a commitment by Novartis to expand access to innovative medicines in low- and middle-income countries by at least 200% by 2025.

Vas is dedicated to unleashing the creativity of Novartis’ employees and making culture a driver of innovation, reputation and performance. Drawing inspiration from ancient philosophical texts and from leading thinkers today, he is committed to developing “unbossed” leaders who inspire and empower their teams to solve problems.

Vas received his bachelor’s degree in biological sciences from the University of Chicago, his M.D. from Harvard Medical School, and his M.P.P. from Harvard’s Kennedy School of Government.

Vicki Sato, Ph.D., serves as chairman of the board of directors at Vir Biotechnology and Denali Therapeutics, and as Venture Partner at Arch Venture Partners. 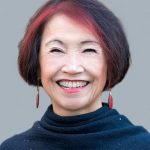 Vicki has a long history of distinguished work in research, teaching, and leadership. She served as Professor of Management Practice at Harvard Business School and as Professor of the Practice, Molecular and Cell Biology, on the Harvard Faculty of Arts and Sciences.

Before joining the Harvard Business School faculty, she worked as President of Vertex Pharmaceuticals from 2000-2005, and prior to that, she was Chief Scientific Officer, Senior Vice President of Research and Development and chair of the Scientific Advisory Board. Before joining Vertex, Vicki was vice president of research at Biogen, where she led research programs in the areas of inflammation, thrombosis, and HIV disease, and where she participated in the executive management of the company.

Vicki received her A.B. from Radcliffe College, her A.M. and Ph.D. degrees from Harvard University and pursued post-doctoral work at the University of California Berkeley and Stanford Medical Center. (Listen to Vicki describe her career path on The Long Run podcast, July 2018). [Editor’s Note: Vicki also serves as an advisor to Timmerman Report.]

Tachi Yamada, M.D., is currently a Venture Partner at Frazier Healthcare Partners. Before this, he was Chief Medical and Scientific Officer at Takeda Pharmaceuticals. 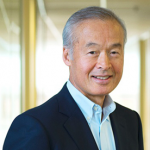 Prior to Takeda, Tachi was President of the Bill & Melinda Gates Foundation Global Health Program, where he oversaw over $9 billion in grants for applying technologies to address major health challenges of the developing world. Before joining the Gates Foundation, Tachi was Chairman of Research and Development at GlaxoSmithKline and member of the board of directors.

Earlier in his career, Tachi was the Chief of the Division of Gastroenterology and the Chair of the Department of Internal Medicine at the University of Michigan.

Tachi received his M.D. from New York University School of Medicine and a B.A. in History from Stanford University.

Jingyi Liu is a physician and an MBA candidate at the Wharton School of Business, where she is a William and Patricia Jewett Fellow. She is passionate about diversity and creating healthier and more equitable futures for patients around the world. Jingyi trained in internal medicine at Stanford Healthcare and received her MD from Harvard Medical School.

Eric Dai is a PhD Candidate in Bioengineering at the University of Pennsylvania. Outside of his research, Eric has served as an investor at Alix Ventures and helped lead Alix’s community and content platform, BIOS Community. Eric is passionate about the intersection of biotech, business, sustainability and social impact.

In RNA Therapeutics, Are Circles Better than Lines?